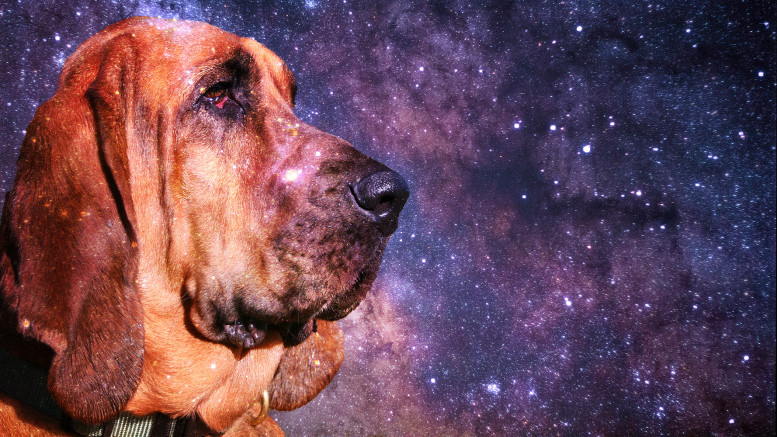 In a shocking twist of events, after beloved therapy dog Blue goes on a spree of mischievous antics, he receives the title of new McDaniel Mascot. Introducing: the McDaniel Blue Terror.

Therapy dog Blue has been a popular and enduring fixture of McDaniel College’s initiative to bring therapy animals to campus since the program’s inception. Typically docile and demure, Blue, a large Bloodhound, can be found on certain Fridays laying meekly outside of Kriel Lounge sporting a smart yellow service vest and panting out phrases such as “who is a good boy,” and “I would never go on a spree of mischievous antics—” which is part of why his recent behavior has taken the community at large completely by surprise.

In addition to eating homework, changing the sign on Big Baker Chapel to say “Blue Baker Chapel,” and blocking a football pass by distracting the quarterback with cleverly-timed insults—a true “offensive pass interference—” Blue took to playing fetch after-hours on the golf course with dogged determination. When Campus Safety saw him approaching from the bottom of the driving range, golf ball held precariously in his jowls, one officer declared, “He came up the hill just like a Blue Terror.”

In light of this, it was clear the school mascot had to change to accommodate the new legend. Blue’s recently-acquired fame ensures that he is on his way out of the doghouse, but sources close to him affirm that he is being kept on a short leash.

Famous canines who have undergone a similar transformation and gone dogue include Lassie, Air Bud, and Beethoven, but the most notable is Scrappy Doo. In the interest of sparing readers who are pet aficionados from heartbreak, here are the most common warning signs that your dog may be going dogue: