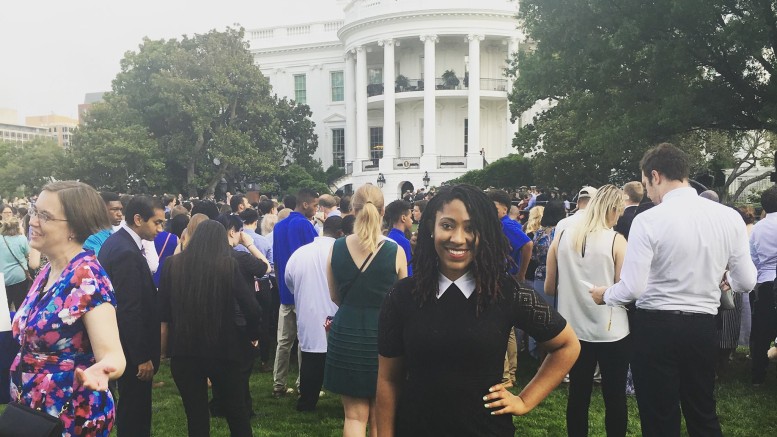 At McDaniel, I held various leadership positions in the organizations I was apart of. However, I never held a job on McDaniel’s campus. I worked full-time throughout my time at McDaniel interning for several of the nation’s top democratic leaders –MD State Senator Katherine “Kathy” Klausmeier (D-8), US Senator Benjamin “Ben” Cardin, and the former Mayor of Baltimore and former DNC Secretary Stephanie Rawlings-Blake–, and in the Office of the Secretary at the Democratic National Committee Headquarters in Washington D.C. working on the 2016 Presidential Election and the 2016 Democratic National Convention in Philadelphia, PA. In January 2016, I became the Legislative Aide for MD State Delegate Elizabeth G. “Susie” Proctor and would become her Legislative Director (Chief of Staff) in June 2016.

I enjoyed my short time at McDaniel (transferred to McDaniel in Spring 2014). My time at this institution and my various experiences, have helped to mold me into the person I am today. For this, I am truly grateful!

My mentors at McDaniel were Dr. Leahy and Dr. Smith. I credit my classes at McDaniel and especially Dr. Herb Smith for providing a solid foundation to understanding the art and craft of politics and political communication.

Dr. Smith’s classes helped foster my passion for public policy that in turn led me to explore potential internships that would show me how theory works in real life. His classes also led to my research, ‘Defending Common Core,’ which examined Common Core educational standards on the state and national levels with emphasis on Maryland. I was able to use this research as background for work on education legislation while interning in U.S. Senator Cardin’s Office in Summer 2015.

While working in Senator Cardin’s Office, I worked hand in hand with staff to block a possible reduction in Title I funding for the lowest income learners in the state’s K-12 education system and prevented the potential loss of ROTC programs at the Historically Black Colleges and Universities (HBCUs) in Maryland. While, I also aided staff in monitoring amendments that could have potentially damaged Maryland’s workforce, during the Senate’s consideration of the fiscal year 2016 National Defense Authorization Act.

Juggling the responsibilities of being a full-time student and full-time employee, were at times challenging. I spent many of my days between Washington, D.C., Annapolis, and Baltimore. Although I had an residence on campus, many times after classes (including 6:30- 9:30 p.m.) I would make the drive back home (Upper Marlboro, MD–outside of Washington, D.C.), so that I could be at work on time the next day. Many mornings, I would leave home by 5:00am so that I could make the hour and half (sometimes two hour) drive to campus to be on time for my 8:00 a.m. classes.

Luckily, I had amazing professors especially in the Political Science and International Studies Department who understood my schedule, and were super supportive. They knew my passion for pushing the progressive agenda, and if I ever had to miss class understood because they knew the significance of the work I was doing. These professors were also there day and night–Dr. Smith, Dr. Leahy, and Dr. Boukhars–to answer any questions, and to bounce off any ideas and give advice. For this, I am forever grateful!

I actually graduated in December 2016. However, I look forward to walking the stage on May 20th. I have served as the Legislative Director (Chief of Staff) for Maryland State Delegate Elizabeth G. “Susie” Proctor (D-27A) since June 2016, and plan to continue this job. Within the next year, I plan to apply for law school and will hopefully enroll in the Fall 2018.

In regards to the future, I will continue with my career in public service both on the Hill (Washington, D.C.), in the State of Maryland, and possibly abroad. I intend on becoming an elected official one day, hopefully working my way up through the Maryland House of Delegates to the Maryland Senate, then the U.S. House of Representatives and the U.S. Senate, and finally as President of the United States  one day. At the end of the day, I just want to make the world a better place!

I do not have any bad memories at McDaniel. My best memory at McDaniel was chartering a chapter of my sorority, the Upsilon Gamma Chapter of Alpha Kappa Alpha Sorority, Inc., on November 13, 2016 with my eleven sorority sisters. Alpha Kappa Alpha Sorority, Inc. is the first Black Greek-letter sorority established by African American college women.

It was a tremendous honor to become not only a member, but a charter member of Alpha Kappa Alpha Sorority, Inc.’s Upsilon Gamma Chapter. Not only will my name forever be in my sorority’s history book, but it will be in the history of McDaniel College–a legacy that I am proud to leave behind.

The best advice I would give to those who are not graduating on-time, would be to tell them “life is not a race.” Things happen, and life happens. Being religious, I feel that all things happen in God’s timing. This might not have been God’s timing for them. I would encourage them to keep their head up, and continue to work towards their degree.

In terms of those who will be graduating from McDaniel in the near future, I would encourage them to take advantage of every opportunity provided by the college and to jumpstart their career while at the institution. While it is cool to be apart of many organizations on campus, real-life experience counts in the job market. Employers will pick someone out of application pool who has proven experience in the given field, over someone who was simply active on a college campus.

Before I graduated from college, I was a full-time Maryland State Employee and Chief of Staff. More importantly, I am one of the youngest Chief of Staff’s in the MD General Assembly. This is why I encourage my fellow Green Terror to look at life’s bigger picture. One can be active on a college campus, but real-life experience trumps all. I also encourage students to remember that  anything is possible in life, as long as they put forth their time and effort.

I look forward to the future, and both seeing and working with many fellow Green Terror in the workforce. I wish everyone the best in their future endeavors, and please vote for me one day! =].