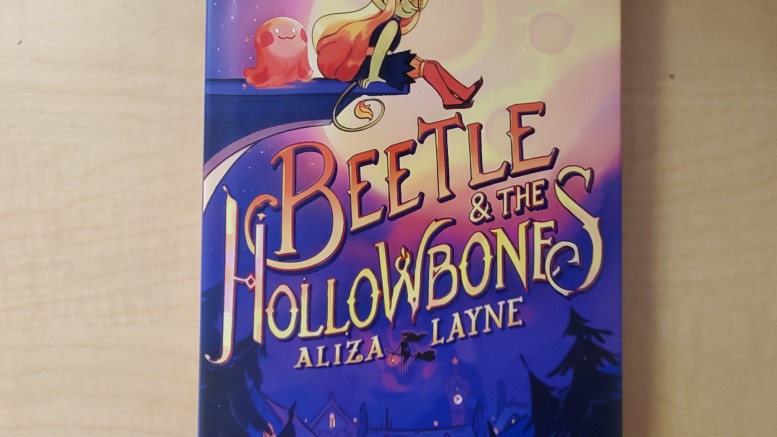 Beetle and the Hollowbones by Aliza Layne follows the adventures of aspiring goblin-witch Beetle and her best friend, Blob Ghost, as they try to solve the mystery of why Blob Ghost is unable to leave the mall grounds.  Further complicating things, Beetle’s childhood best friend Kat Hollowbone has returned to town and Beetle’s feelings about that are all over the place. After all, Kat is now a beautiful, powerful witch who doesn’t really seem to need Beetle around anymore. Or at least, that’s what Beetle thinks. Throw in an evil scheme from Kat’s new mentor and Beetle’s rising magical powers and you have a story you won’t want to put down.

I was super excited to read this one, and it didn’t disappoint. The graphic novel is illustrated beautifully with a wonderfully spooky Halloween vibe tied in. The colors are rich and vibrant, and the orange and purple color scheme works well to set the atmosphere. Though targeted towards a younger audience, if you like graphic novels, Halloween, and LGBT+ representation, then you’ll love Beetle and the Hollowbones.

If there’s anything critical to be said, it would be that a few frames of the novel were hard to follow, but not to the point that it drastically took away from the plot. I loved the adorable romance between Kat and Beetle and how the story depicted some harder topics like having to stand up to family members and navigating changing friendships. In addition, Blob Ghost is such an adorable character that I too would like to spend an afternoon exploring the mall with them.

All said, Beetle and the Hollowbones was a genuinely fun, heartwarming story that allowed me to escape into its world of magic for an afternoon, which in my opinion makes it well worth the read.

Favorite Quote: “Each day we wake up and we make a choice: to give up or to do our best and hope it comes out right.”

Beetle and the Hollowbones is Aliza Layne’s first novel, though she is also the creator of the long-running webcomic Demon Street. Beetle and the Hollowbones was released through Simon and Schuster publishing on August 4, 2020 and can be purchased here. You can also visit Aliza’s page here if you’d like to see behind the scenes of Beetle or check out Aliza’s webcomics.