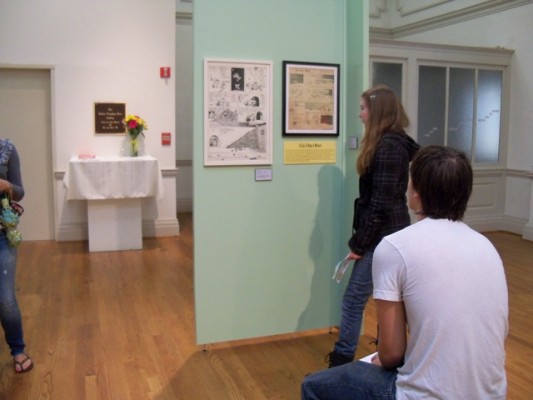 Comics are much more complex than the colorful entertainment value they provide in the Sunday paper every week, as demonstrated in the newest exhibit at Rice Gallery in Peterson Hall.

Having opened October 19, the exhibit titled “Kings of the Pages: Comic Strips and Culture 1895-1950” will remain open weekdays through Saturday November 19, and I recommend everyone check it out. Regardless of your level of comic knowledge, you are sure to exit the gallery with a minimum of new respect for the art of comics.

The gallery combines history and art and was inspired by Communication professor, Dr. Robert Lemieux in collaboration with graduate students from the Corcoran College of Art and Design in Washington DC. Lemieux’s comic passion is seen in the details throughout this compelling exhibit.

After following the comic character cutouts up the stairs and into the gallery, the pastel-colored panels drew me in, and the 28 large tear strips and original proofs kept me captivated. I was shocked at how large comics used to be – one strip would take an entire page!

I found myself looking at some of the first comics, comics from my grandparent’s time, and so many comics that I had never heard of. Then there were some comics, like “Gasoline Alley” and “Blondie,” which began years ago and continue to run weekly. Learning the background stories of these comics let me appreciate their evolution over the years.

This is more than a gallery. It is a history lesson starting with the influences of William Randolph Hearst and Joseph Pulitzer and moving on to the beginning of color and the origin of action comics.

While comics originated as a method for gaining readership, they became a tool for discussing larger topics such as World War II and the Great Depression. The cultural differences of comics pre- and post-war give us comics today.

Depending on how much time you have to spend in the exhibit, you could read both the complementary text captions and the comics and leave with no shortage of new facts. You can also get your weekly dose of comics here, as they are changed out each Sunday by the Carroll County Times.

In addition, there is a speaker series complementing the exhibit, including Brian Walker, Harry Bliss, Kevin Kallaugher, and Richard Thompson

Admission to campus programs is free and open to the public. Check out mcdaniel.edu/comicsart for more information including gallery hours and speaker dates.

Make sure you stop by the Rice Gallery and check out some of the comics waiting to be discovered.