United Hands of Carroll County helps the local immigrants to settle in
and McDaniel College is helping this organization. 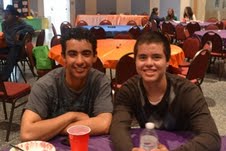 ena Hartley, Director of the program, came to the United States from Peru and moved to Montgomery County. The transition was very hard for her but she was surrounded by family members and great people in her neighborhood.

Montgomery County is full of diversity, so when she moved to Carroll County after she married 16 years ago it was a cultural shock.

There were few Hispanics in Carroll County. She would enter a store and probably see maybe one or two.

But years later, the Hispanic community started to grow so Hartley’s neighbor, who was a member of St. John’s Catholic Church in Westminster, had the desire to start a Spanish mass on Sundays. Many Hispanics went to the mass on Sunday and they were mostly people that did not know English and needed help finding jobs.

People were coming to mass to ask for help, so Hartley came up with the idea of having a central office to help the immigrant community.

The United Hands is a center for the immigrant community. Based on Clifton Boulevard in Westminster, they offer counseling about school and colleges. In addition, they provide translation services from English to Spanish when people are going to the hospital and there are no translators available, or when they need a letter to be read to them.

Since the immigrant community and many people were coming into the office for help, the organization decided to get interns from McDaniel College, especially bilingual students.

Over the last four years, United Hands has had McDaniel students working for them, usually two per year.

“They were wonderful,” Hartley said. Hartley talked about Betsy Warner, who graduated in 2012 and was one of the helpers who made a catalogue about the organization.

“I think United Hands is a wonderful organization. I really appreciate the fact that it is designed to help the new immigrant community adjust to Carroll County as it is designed to inform the individuals of the opportunities allotted to them in the town,” Patton said.

Hartley said that running this type of organization is very stressful because they need to report everything to the government in order to get grants. If they do not get the grants, it will be impossible to keep having the organization. If they are not there, who is going to help the immigrant community?

Hartley feels lucky that she has interns and people like Mary Carrier who has been an Outreach Assistant for United Hands of Carroll County for three years.

Carrier only works one day per week and her tasks are to research client inquiries, and coordinate client requests with service providers, businesses and organizations. She also attends monthly meetings with the Community Services Council to help keep informed, while networking with other non-profits and service providers.

“I have always enjoyed helping people. I have also worked in the home-based care-giving business and found this UHCC position to be a good way to assist the immigrants of Carroll County, even though I am not bilingual,” Carrier said. “I try to imagine what life would be like if I suddenly were living in a foreign land and needed to communicate with the locals.  I would wish there was a place like United Hands to assist me.”

According to Hartley, United Hands helps around 200 people. They receive 15 calls a day and 5 visitors a day, even on weekends.

Hartley has a flexible schedule and she is always willing to help anyone when they need it.

According to Carrier, last year United Hands partnered with the Marriage and Relationship Education Center to put on the first Spanish Parenting Workshop for teens and their families.

“We were grateful for the assistance of several Spanish-speaking McDaniel students who volunteered for the event,” Carrier said.

According to Carrier, United Hands is involved with the Carroll Citizens for Racial Equity and they are helping in the upcoming annual conference being held on Friday, May 3rd from 8 a.m. – 2 p.m. at the Carroll County Public Schools Central Office in Downtown Westminster.  This year’s conference theme is “Our Hispanic Community.”

According to Hartley, people are always looking for her help and she found very nice people in the community.

“People know me and they feel very close to me and they invite me everywhere,” Hartley said.

Even though there are some people who say that Carroll County is not welcoming in terms of the immigrant community, Hartley says, “I found good people and there is no complaint about United Hands in the community and I have not seen anything negative.”

For more information about United Hands visit their website www.united-hands.tripod.com and for internship opportunities please contact Elena Hartley at elenahartley@aol.com.

Are students paying too much for housing?