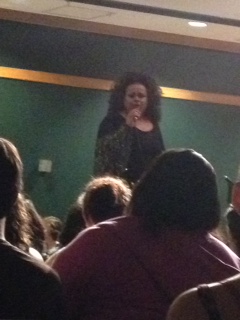 It’s a combination of Halloween and a fashion show.  People dress up in costumes and strut their stuff to music.  The emcee introduces and offers some commentary during each performance.  This seems like a typical boring show, right?

Drag shows have grown in popularity around the nation in the past decade.  On Tuesday, April 9, McDaniel hosted its first ever drag show, featuring three professionals and two McDaniel students.

And what a show it was.

I’ve never been to one of these things before, so this was a completely new experience for me.  I wasn’t sure how I felt about seeing guys overuse makeup and dress in skimpy girl clothing.  When the first performer, “Anita Minnett,” came out lip syncing various songs, such as “Hopelessly Devoted to You” from Grease and “Survivor” by Beyoncé, I didn’t know what to think.  Honestly, I was a little freaked out.  People call this entertainment?  A cross dressed guy flailing his arms around acting like he can dance?  What has our society come to?  I almost got up and left.

But oddly, it was intriguing enough to keep my attention, so I stayed and watched the other performers.

“Pamela de la Cruz,” as “she” is called, came out dancing to a Latin tune, and lost “her” skirt about halfway through the song.  Yes, “she” was covered underneath.  I kept thinking to myself “people find this entertaining?”  The one performer who definitely caught my attention was “Karmella,” who ended up doing high kicks and splits.  I have to admit, that was pretty impressive.  I give “her” major props for that.

About halfway through the first act, the audience found out that there was a nine year-old girl in the audience.  Everyone, of course, said “awwww!”  My first thought?  Who in their right mind brings a nine year-old to a drag show?  I was feeling uncomfortable being there, so I can’t imagine how she was feeling, especially since the “girls” kept calling each other bitches (in a loving way, of course), and using other profanities.

Needless to say, I ended up having a good time at this show.  It was quite the experience, but I’m not sure I’d jump at the opportunity to go to another one.  The audience expressed interest in having another one next year, so if you’ve never been to a drag show before, you should definitely check it out.

And just FYI, keep some dollar bills on you.  Those ladies love their tips.

Cutting the religious studies department would be a mistake