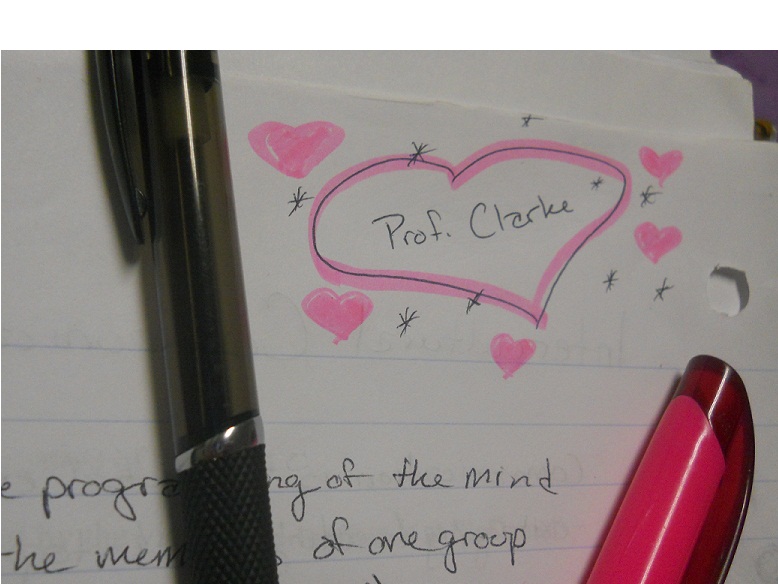 Instead of paying attention to what is being written on the board, are you spending your class time daydreaming about your biology professor’s cute butt, or doodling hearts in the margins of your notebook around the name of your adorable art teacher?

Admit it, you’ve got a crush on the professor. Don’t worry though, it’s not that uncommon.

57% of the McDaniel students that were surveyed said that they’ve had a crush on a teacher.

When asked about their opinion on students admiring their teachers, one anonymous student said, “I think that it is pretty normal and common.  I have talked to many people that have had crushes on certain teachers both male and female.”

In college, the roles of teachers and students are often a bit more flexible than they were in high-school. With smaller class-sizes formatted as casual discussions, it’s easy to fall into the habit of thinking of a professor as something more like a colleague or friend, rather than an authority figure.

The relaxed college atmosphere allows an extraordinary amount of opportunities for teachers and students to form friendly relationships, and many of McDaniel’s students are already “friends” with their professors on Facebook. It is not unheard of to have professors invite their class to come over to their houses for a class party.

For some, this is normal; since students and teachers are both adults, they should treat each other as equals. Yet, people feel that there’s still a line you just shouldn’t cross.

When the distance from mentor to friend is shortened, the next step from friend to romantic interest doesn’t seem so far off. It can be confusing and complicated (not to mention distracting when trying to learn) to have a crush on your teacher. Professors are authority figures, symbols of stability, encouragement and support, which are all things that young people look for in a partner at this age, so it’s not so crazy to think that a student might develop an infatuation with one. However, it’s important to remember that it’s only a crush.

An anonymous junior explained that it’s okay to have a crush on the teacher “as long as students realize the fantasy aspect of it and try not to act on feelings because it could cost the teacher their job.”

Of the fourteen students surveyed, it was mostly girls who admitted to finding an instructor attractive. Six out of seven girls are attracted to a teacher, while only two out of seven guys are.

Overall, students agreed that developing a crush on a teacher is normal, to an extent. Acting on those feelings makes everyone uncomfortable and puts those involved into some dangerous situations.

Staying Healthy During the End of the Semester

The Campus That Lost Power: A Poem