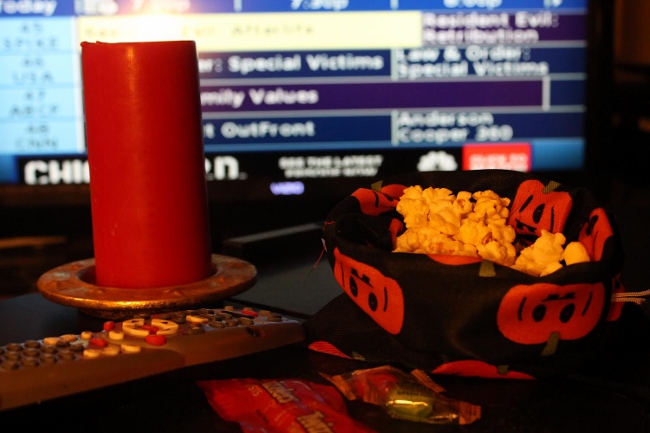 This Halloween, get in the spooky spirit by watching the best of what television has to offer. Of course, you can’t go wrong with shows like The Walking Dead, American Horror Story, or Ghost Hunters, but here’s a list of my favorite TV series’ Halloween episodes that you might not know or remember.

This classic episode plays on the elements of horror movies with a moral lesson hidden in the ending, because it wouldn’t be Boy Meets World without a good moral lesson. When Cory and the gang get stuck in detention, things turn spooky. Mysterious chalkboard messages, dead bodies, a creepy janitor and a guest appearance by Jennifer Love Hewitt all lead to the most haunting episode ever. This episode will definitely help you survive if you happen to find yourself in a horror film this weekend.

This episode has everything from Alfred Hitchcock to The Rocky Horror Picture Show, but fear is the main theme. The characters are forced into situations reminiscent of several of Hitchcock’s films. Eric develops vertigo after he falls off the roof. Hyde and Fez think they witnessed a murder. Donna goes incognito to prove a point. Red hides from the paper boy he never paid. Kelso is victim of a case of mistaken identity and Kitty is attacked by hungry birds. If you need a break from the horror, this will definitely lighten the mood with a lot of laughs.

Technically, this whole series is full of horror and thrills, so just about any episode will do. The earlier seasons are the best for some truly creepy monster encounters but this episode follows Sam and Dean, two monster hunters, whose investigation of some bizarre deaths leads them to discover a witch is in town. The boys must look into the lore of All Hallow’s Eve to find a way to stop the witch before a spell can be cast that raises Samhain, the demonic origin of Halloween. If you’re looking for something a little more on the scary side, this might be the trick (or treat) that you need. It’s not The Exorcist in terms of horror, but it is among the spookier TV shows out there.

When the Krusty Krab stays open 24 hours, Spongebob and Squidward are forced to work the graveyard shift. Squidward can’t resist scaring Spongebob by making up a scary story about a former employee. He tells Spongebob that the former fry cook was hit by a bus and fired at his funeral and now he returns every Tuesday night to seek revenge. Squidward laughs at Spongebob’s fright, but when the made-up story starts to come true, even Squidward starts to believe it. For the kid in you this Halloween, watch this and eat all the candy you want- your parents aren’t here to stop you!

In case you haven’t gotten around to watching Buffy the Vampire Slayer (which you should) Halloween would be the perfect excuse to. The scariest thing about it might just be the 90s fashions but the show does revolve around vampires, demons and all sorts of other monsters. This episode, craftily titled “Halloween,” takes place on the holiday when everyone in town gets a little too carried away with their costumes, actually becoming what they dress as due to an enchanted costume shop. This is a fun episode to watch as you get to see the heroes out of character and maybe get some last minute costume ideas of your own.

The Simpsons {8.1} “The Treehouse of Horror VII”

This particular episode seemed pretty freaky back in the day when I first saw it and it has stuck with me ever since. Bart learns that he was born as a conjoined twin, but his brother, Hugo, was considered evil, so he was locked up in the attic. When Bart and Lisa go to investigate, Hugo escapes to traumatize Bart.  You just can’t go wrong with The Simpsons and the selection of Halloween episodes is enormous. There are 25 of these special episodes and each one is filled with hilariously frightening and gruesome scenes.

Check out these six of my favorite Halloween-themed episodes or suggest your own in the comments!

Just turn off the tap