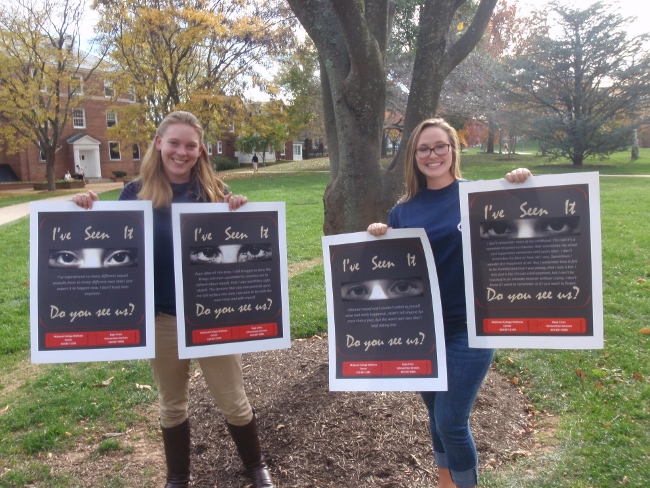 McDaniel students Leigh Brownell and Taylor Niemetz have created a sexual assault awareness project that attracted visibility on campus and attention from the National Guard.

In the spring of last year, Leigh Brownell and Taylor Niemetz started their “Love Project,” a poster series about sexual assault that culminated in a display located in Ensor Lounge for the first couple weeks of October. The poster series, which features the eyes and stories of survivors of sexual assault taken from the McDaniel College community, will be placed into residence halls across campus and is in the early stages of being implemented into the National Guard.

Born of discussions during a social work night class and from a passion for sexual assault and rape awareness, the poster series was designed, as Brownell stated, “to empower people, as opposed to label people.” 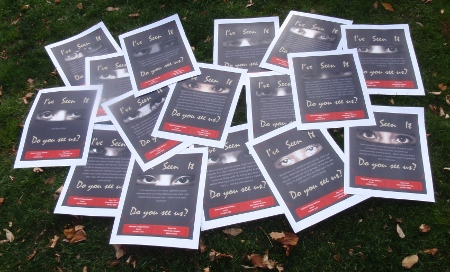 Brownell and Niemetz’s “I’ve Seen It” posters feature photographs of the eyes of McDaniel community members who are survivors of sexual assault.

“I wanted to do something ‘in-your-face’ but I wanted it not to be overlooked at the same time,” Brownell said. “Originally it was going to be pictures of faces…. We ran into a whole bunch of liability issues with that, legality and everything, so we couldn’t do that…. Eventually we came up with the idea of eyes, and it worked.”

Brownell and Niemetz gathered supporters and participants through word of mouth, talking to friends and classmates until they gathered enough people. In total, there are 16 different posters, one for each person.  Four other people either missed the deadline or felt uncomfortable and backed out at a later stage. The funding for the printing of the posters came from Campus Safety.

Brownell is excited for how well the McDaniel community has responded to the posters.

“Some of the professors were asking their students to go see it, which was exciting because…this was someone we never met before saying you really need to go see this.”

Niemetz was integral to cultivating the National Guard’s interest in the poster series. Discussions for that are ongoing since Brownell and Niemetz need to copyright their idea. Also, the National Guard needs to find a way to implement the idea beneath the laws and regulations in place to protect its members while keeping the project’s goal in mind: Real People, Real Stories, Right Where You Live.

“Otherwise it’s just another anonymous sexual assault campaign that you don’t know the person and you feel no connection to it,” Brownell said. “You might not have ever met them and you problem never will. And it’s not an actor or something.”

Brownell and Niemetz will be given all the credit for the National Guard’s implementation of the posters. They will also be given control over future implementation in any other organizations or universities that want to use the idea.

According to Brownell, the National Guard is “really excited” to implement the posters.

Their next step for the posters is to get them in the residence halls and copyright them. Brownell said, “I’ll be applying for the Griswald Zepp award to try to get…the award…and then if we get that we can use the money to copyright our idea and start a website.”

Sculpture Unveiling with a Hero