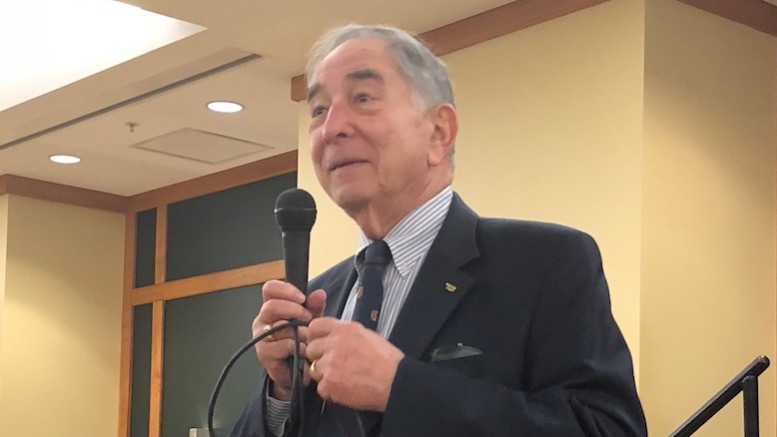 Holocaust survivor Emanuel (Manny) Mandel stood in front of a crowd of McDaniel students and Carroll County residents, sharing his story of survival in one of history’s darkest periods.

Despite Mandel’s grim childhood in Budapest, Hungary, he shared his story and his humorous nature shined through the darkness. Having travelled throughout the United States and the world, Mendel, now eighty-two, has been sharing his story to inform current generations of the tragedies of the past.

“Educating people [about the Holocaust] is very important,” Mandel said. “The knowledge of the Holocaust is such a foreign subject to everybody.”

Mandel, of course, also has a coincidental connection to McDaniel College. The European city is home to McDaniel’s satellite campus, where students can live and study abroad.

The course of recent history in Budapest shows the growth of a city of rich, culturally-driven tourism from the shackles of what was once a stronghold of the Nazi regime. Mandel was 8 years old when Nazi forces invaded the city in March of 1944, but the glimpses of the Holocaust were seen firsthand even before the Nazi invasion.

“[The Nazis] called for a pogrom – a senseless, useless, purposeless exercise of what [the power] can do to you and you can do nothing about,” Mandel said. “What they did was, everyone ordered was marched towards a river, and they were shot into the river, never to be seen again.”

Experiences like this occured throughout Europe, and people of all ages witnessed them. From children to the elderly, the brutality of the Nazis was real and vivid.

“This was a first hand experience of a 5-year-old,” Mandel said. “I had no idea of what it meant, I didn’t know what dying means.”

The opportunity to hear a Holocaust survivor share their story in person is truly an experience with living history, as, according to a publication by Time Magazine, only 100,000 survivors were living in 2016.

“Having someone in flesh and blood right before you who lived through the Holocaust really wakes people up to the true horror these people went through,” freshman Ben Igo said. “[It] was a surreal moment.”

As World War II continued to rage across Europe, the Holocaust began to expand its reaches further than any person could have imagined. Mandel and his family would eventually become victims of the evil and violence plaguing Europe.

“It was a situation where a little boy has begun to experience the horrors of war and the horrors of the Holocaust,” Mandel, who also serves as a volunteer at the United States Holocaust Memorial Museum in Washington, D.C., said.

With each passing year, the Holocaust crept farther and farther to Mandel’s home of Budapest. As a child, Mandel’s father was ordered to work away from home from 1942 until 1944.

Mandel’s tale of surviving some of history’s most tragic times was an inspiration that impacts current and future generations. As time passes, it is crucial to preserve knowledge of the Holocaust.

“Generations in school probably are taught the bare minimum about the Holocaust,” freshman Isabella Lawbaugh said. “History repeats itself, and being aware of what has happened [can prevent that].”

The United States Holocaust Memorial Museum is located off of the National Mall in Washington D.C. Since the museum’s dedication in 1993, more than 40 million have visited, including 99 heads of states and more than ten million school-aged children. Online, the museum’s website is available in 16 languages.