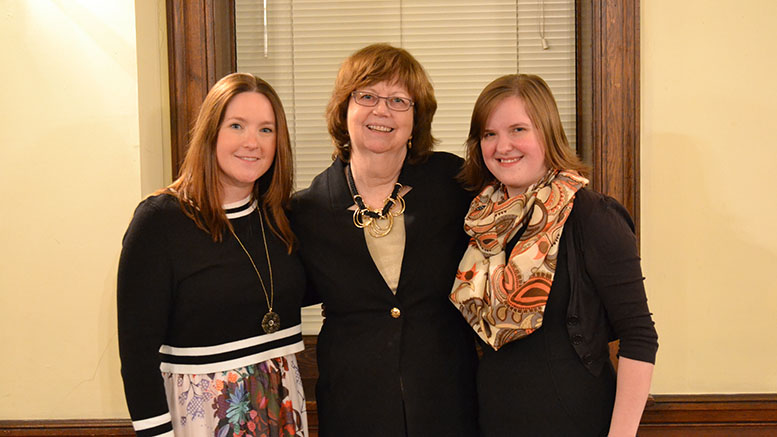 “We are delighted to welcome back to campus two alumnae who are published poets,” said English professor Kathy Mangan, the Joan Develin Coley Chair in Creative Expression and the Arts at McDaniel. “I had the pleasure of teaching both Melisa Atkinson Mercer and Karen Meadows during their respective McDaniel years, and it’s gratifying to see two former creative writing students go on to establish themselves as poets.”

With opening remarks from President Roger Casey and Kathy Mangan, the evening commemorated the memory of B. Christopher Bothe as well as McDaniel’s love for creative writing. According to the Bothe Lecture Collection, this annual lecture “brings a distinguished visiting writer to McDaniel’s campus for one day to meet with student writers and to give a public reading and lecture. B. Christopher Bothe, a member of the class of 1972, was a poet, award-winning journalist, and printer who died in 1984. Bothe’s family and friends developed the lecture in his memory in 1987.”

The two visiting poets this year had attended Bothe Lectures during their time at McDaniel, too. Melissa Atkinson Mercer, class of 2010, graduated with a double major in English and Sociology. She went on to earn her Master’s from West Virginia University. Karen Meadows graduated in 1999 with a degree in Psychology, and later earned her Master’s from Hollins University.

Both women are also published authors. Mercer has successfully published five chapbooks, the full-length collection “Saint of the Partial Apology,” and, most recently, “Knock,” which was released on March 1 and focuses on mental health and depression.

“I didn’t want to write ‘Knock’ just for myself,” said Mercer. “It is intensely personal, but it also comes from years of deep listening. So many fierce, compassionate women in my life have struggled with shame and depression; they’ve been discounted and silenced and not believed. This book is as much about listening as it is about speaking—I hope it inspires readers to do more of both.”

Meadows’ poems have appeared in “Subtropics,” “Blackbird,” and “The Hollins Critic.” And just this past month, she published her first collection of poems, entitled “almond, eyeless.” According to Meadows, the book “confronts how the self is compromised by society, relationships, or even brief, impersonal interactions, yet maintains the persistent, often desperate need to be understood by another.”

At the end of the night, the audience was encouraged to participate in a brief Q & A. When asked about their successes, both women were incredibly humble and attributed their achievements to McDaniel’s writing program.

“Bringing them back to the Hill as the 2018 Bothe poets during the College’s sesquicentennial year was a splendid way to celebrate McDaniel’s 150th anniversary,” said Mangan.

Both Meadows’ and Mercer’s books are available for purchase in the campus book store.

Movie Review: “Moonlight” Doesn’t Shoot for the Moon, Doesn’t Have to