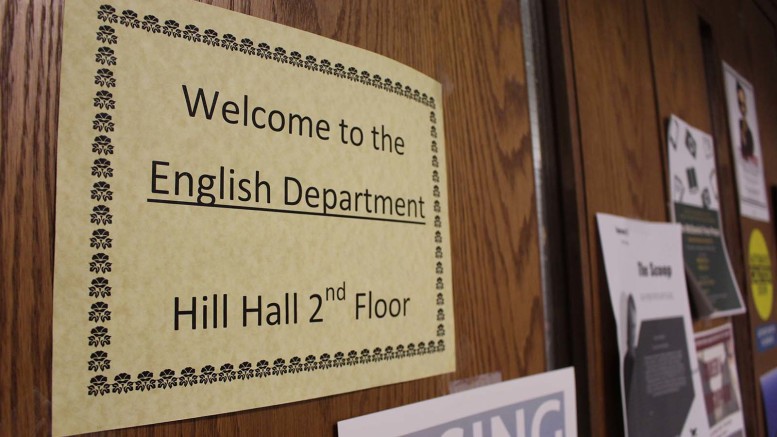 The English department first started exploring the possibility of such a major in the fall of 2016 by conducting focus groups to discover whether students – both current English majors and those from other departments – would have an interest in a writing major. Since then, faculty have also taken into consideration alumni feedback and the self-designed majors of recent students who wanted to focus their course work more on writing than literature, which is the focus of the current major.

“You get feelings from talking to students over time that we needed to keep thinking about whether it would be more to the point to have a robust writing program,” said Robert Kachur, Ph.D., the main professor shepherding the major’s drafting process. “Because at first we just expanded the writing minor to have more choices, but then as we were looking towards the future, what we found is that there’s interest in an actual major.”

Now the draft is ready to present to the Curriculum and Academic Planning Committees for approval, the next step in the process. The 48-credit major will feature three tracks: creative, professional, and digital writing. Several existing English courses will be restructured and renamed to fit the new tracks, along with the addition of a few new classes. The major will also require an experiential learning credit, which can either be satisfied through an internship or certification as a tutor in the Writing Center. Students will also be required to take two literature classes.

“It’s a real labor of love. We all have a lot going on and creating a new major is a lot of work, but there’s a lot of motivation, and everybody is on board,” said Kachur. “We’re really excited about it. Even the folks who won’t teach in it much are still very supportive. They’ve been so thoughtful in helping us.”

The English department does not expect this new major to be affected by the recent departmental changes. According to the draft of the proposed major, the program evaluation from the STGPV encouraged the department to work towards positive institutional investments.

“This new major will not require additional faculty to support it,” the draft states. “Future hires, should we be lucky enough to justify them, would be contributors to this major, but we can deliver it with those we have on board, now.”

Faculty are also hoping the new major will help distinguish McDaniel from other colleges that pride themselves in their writing programs.

Once the major is approved by the necessary committees, the department will continue to tune in to student feedback and hold more focus groups.

“We really want to know what students really want, so we’re going to get a lot of data in the first three to four years,” said Kachur. “We’re going to keep an eye on it the next few years looking at the data, seeing what people are registering for, [and] tweaking along the way as well.”

It is projected that the new writing and publishing major will be available to students beginning in Fall 2020.

Corbit’s Charge: A look into the not-so-well-known Civil War battle fought right on this campus