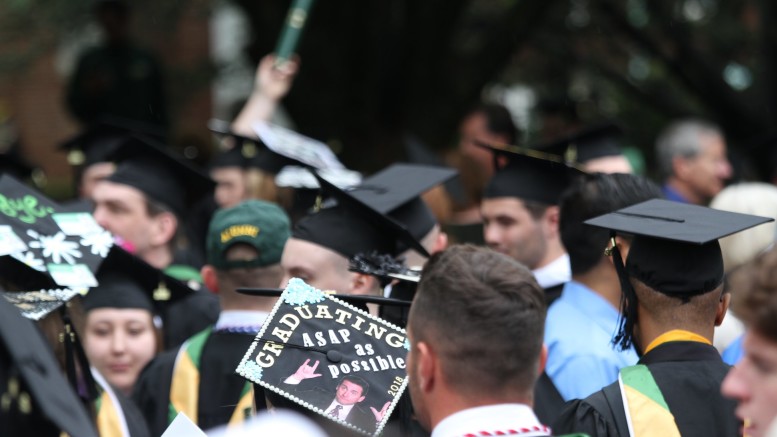 Undergraduate and graduate students will, for the first time, graduate in different ceremonies this spring.

The graduate commencement ceremony will be held at 9 a.m. at the Gill Center on Saturday, May 25, and undergraduates will follow at 3 p.m.

This change was prompted by the recent renovations to the Gill Center’s ground level, where the stage and extra seating used for graduation ceremonies were stored prior to the building’s updates. With the storage space now filled with classrooms, and limited room for storing graduation equipment, the number of available seats for graduates and their guests has dropped.

“We had to put faculty on the floor [as opposed to on the stage], and we lost the bleacher seats,” said Barbara Clinton, executive assistant to Provost and Dean of Faculty Julia Jasken. “So that’s 600 seats that we lost.”

School officials made the decision to accommodate the number of graduates and attendees by splitting the ceremonies, which allows for a significant increase in space at each ceremony. This year, graduating students are allowed up to eight tickets, an increase from last year’s six.

“When you graduate, you want your family there,” said Clinton.

“They might realize it’s not the length of the whole [combined] ceremony,” said Towle, noting that graduate students will no longer have to attend a ceremony that lasts several hours.

While it is difficult to gauge attendance for the graduate commencement – as there is no precedent for an exclusive graduate ceremony – the undergraduate ceremony’s 3,000 seats are still expected to be filled, according to Clinton.

Despite the overarching split, however, differences between the two ceremonies will be minimal. Both will follow the same format, and faculty will attend both ceremonies.

An additional change to graduation weekend activities will affect the Senior Investiture and Honors Convocation the night before commencement: instead of being held in the Gill Center as in previous years, it will take place in Alumni Hall.

“Everybody’s closer,” said Towle of the switch. Before this year, she said, the Gill Center had an ample amount of extra seats with the few hundred who attended, and Alumni Hall will be more comfortable.

Both ceremonies will be live-streamed.

The administration is looking forward to these changes.

“I think this will be fantastic for everybody,” said Clinton.