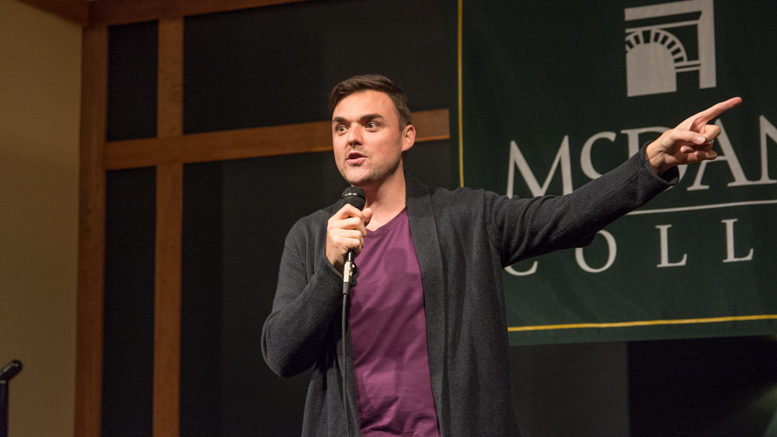 Sam Killerman entertained an audience while bringing up a story about gender and sexuality. Photo by Kyle Parks.

Early into his college career, Sam Killermann realized that others perceived him in an unexpected way: he was constantly assumed to be gay. In reality, however, Killermann eventually came to realize that he is just “metrosexual.”

On April 5, students, faculty, and other community members were invited to Killermann’s hour-long show in which he comically tells his story while providing an important message.

Despite not being gay, Killermann still struggled to come to terms with who he is. This was especially due to others continuously presuming that he’s gay. Killermann detailed a time when he believed he was in a relationship with a girl; however, upon his request to make it ‘Facebook official,’ she replied, “but you’re gay.”

Killermann stated that this never happened in high school, but the situation changed when he began college. He felt threatened by this new assumed identity. Looking for answers, he visited the Queer Resource Center at his college, Purdue University. After a lengthy explanation of his situation, he was told that perhaps his problem stemmed from gender, which he had previously never considered.

Being an admittedly effeminate man, an identity he is perfectly fine with, Killermann realized that these perceptions related to his gender expression. At this time, Killermann became very fascinated with the concept of gender. His new understanding played a major role in the reduction of his fear of being perceived as gay.

For quite some time, said Killermann, he merely explained himself as “not gay.” Nevertheless, he began to become comfortable with this perception. He was even able to begin to have polite discussions with those who assumed he’s gay. Killermann even humorously remarked that he now has a Word document with 350 different reasons people gave for believing he’s gay.

This brought Killermann to the issue of stereotypes. While essentially all of the reasons people gave for thinking he’s gay are positive, such as “because you look clean” and even “you talk good,” these are ultimately stereotypes. He acknowledges that all aspects of identity have stereotypes, but maintains that no one reflects all of the stereotypes they are characterized by.

Killerman came into contact with the word “metrosexual” after an audience member at one of his standup acts rose and blurted out “are you gay?” to which another audience member replied “umm, it’s pronounced ‘metrosexual.’”

This term can be defined in a variety of ways. Dictionary.com defines this as “a heterosexual, usually urban male who pays much attention to his personal appearance and cultivates an upscale lifestyle.” While “metrosexual” can mean something different for everyone, it often involves being mistaken for gay.

Utilizing a variety of anecdotes to detail his experience, Killermann then transitioned to the idea of labeling. He differentiated between self-labeling, which can be an empowering experience, and labeling by others, which can be problematic.

At times, though, Killermann admitted that he has inevitably succumbed to his internal prejudices, which he believes are held by all. A friend of his, a strong social justice advocate, told Killermann that “[he’s] going to have those thoughts.” The power here, though, is what manages to make its way out of a person.

Killerman differentiates between discrimination and oppression; discrimination might be a small act against another, whereas oppression refers to this on a societal level. Even more, Killermann elaborated on internal oppression, (i.e. what we’re taught about ourselves, even if it is not true at first, but that we allow to become real due to outside pressure). He cites the example of a gay friend of his who pursued hookups and the like rather than a preferred long-term relationship due to his internalized image of being gay.

20,000 leagues above my expectations