Fitness Buddies grew out of a pilot project in the spring semester of 2013. Sophomore Roger Isom organized the project as an initiative to inspire children to become active. Students involved in Fitness Buddies team up with children from the Boys and Girls club to engage in fun workouts at the Gill Gym on campus together.

For the pilot, Isom asked McDaniel student athletes to host a few workout sessions for children at the Boys and Girls club, which was met with enthusiasm.

“When I saw the kids all excited to play in the gym, even with the little equipment that they had, I knew that Fitness Buddies had strong potential,” says Isom.

This year the organization has opened mentoring positions to the entire campus. They currently have about eight mentors with different majors, interests and reasons for being part of the club. The team works to organize the workout sessions and make sure everything goes according to plan.

Isom began to realize the benefits of physical activity during a weight lifting course in middle school.

“After a few days of working out I noticed tremendous gains and a newfound source of confidence,” says Isom.

He wanted to offer this information to children to inspire them to develop healthy living habits early in life with the help of a healthy mentor relationship. He also hopes to eradicate negative comments toward physical activity. Isom hears many negative comments on exercising from his peers, such as, “I don’t need to work out,” “I’m not an athlete,” or “Working out is boring.” During his first year at McDaniel, he began talking with people about his Fitness Buddies idea, and since then it has grown into the project it is today. 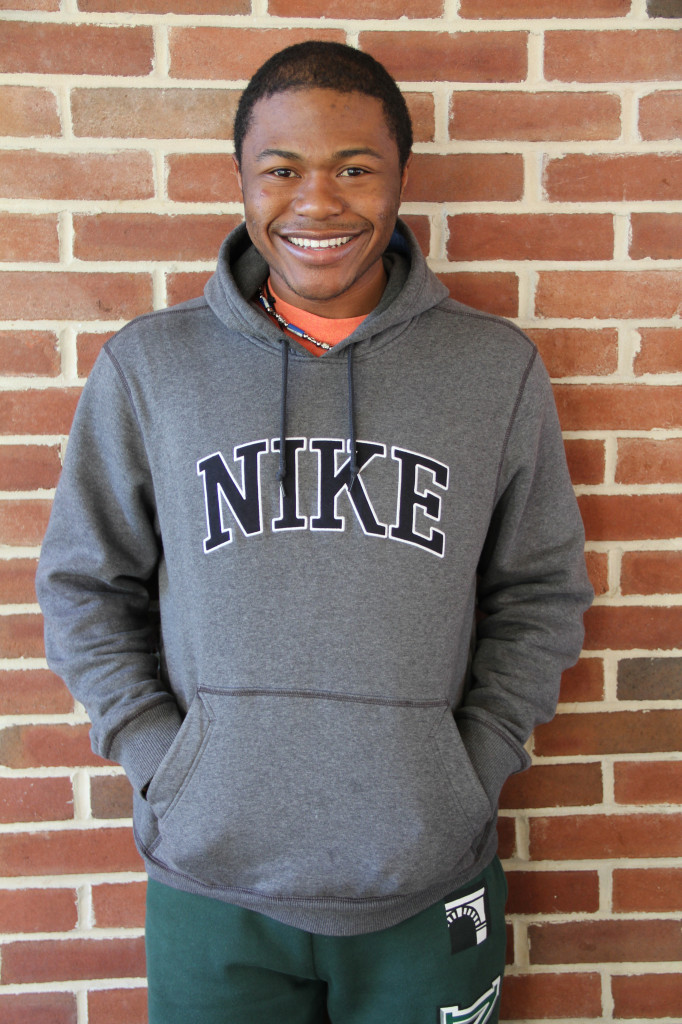 Roger Isom worked with kids to get them excited about fitness.

Fitness Buddies’ ultimate goal for the semester is to strengthen their relationship with the children at the Boys and Girls Club.

“We believe that fostering this big brother and big sister dynamic will allow our message about physical activity to be more influential,” says Isom.

Fitness Buddies is not only about keeping up physical health, but also strengthening the emotional bond between the children and mentors.

“We play with them, talk with them, listen to them, and most importantly respond to them,” says Isom.

With the money from the Griswold-Zepp award, Fitness Buddies has purchased fun and creative equipment for the kids to use, such as Hop-Along Bouncers. They also purchased water bottles and plan to create nutritional gift baskets, which include a nutritional plate and information about healthy eating, for their lasts session.

“The kids love [Fitness Buddies],” says Isom. “They don’t want to leave when it is time for them to go.”

If you are interested in working with children to inspire them to live a healthy lifestyle, you can contact Roger Isom at rgi001@mcdaniel.edu for more information about Fitness Buddies.

First-year Zoie McNeill became a vegan in ninth grade for ethical and dietary reasons. In high school, she not only started her own vegetarian awareness club, but also became involved with healthy living organizations such as Physician’s Committee for Responsible Medicine (PCRM), Farm Sanctuary, the Sierra Student Coalition and animal shelters. As a senior, she worked with PETA and competed in their Cutest Vegan Alive contest.

Interested in veganism and environmentalism, McNeill came to campus in fall 2013 hoping to create another club for vegans, vegetarians, and omnivores interested in healthy living. When she found out about the Griswold-Zepp award, she decided to apply to intern with Farm Sanctuary, which houses farm animals rescued from factories in Watkins Glen, New York. She will work with them this summer and then bring what she learns back to McDaniel in the fall to educate her peers on healthier ways to eat.

“[Veganism] is a really big, multi-faceted issue,” said McNeill, and adds that people see it as a big, scary problem when it isn’t. “What I really like about it is how easy the solution is. I think there’s something empowering about that.” 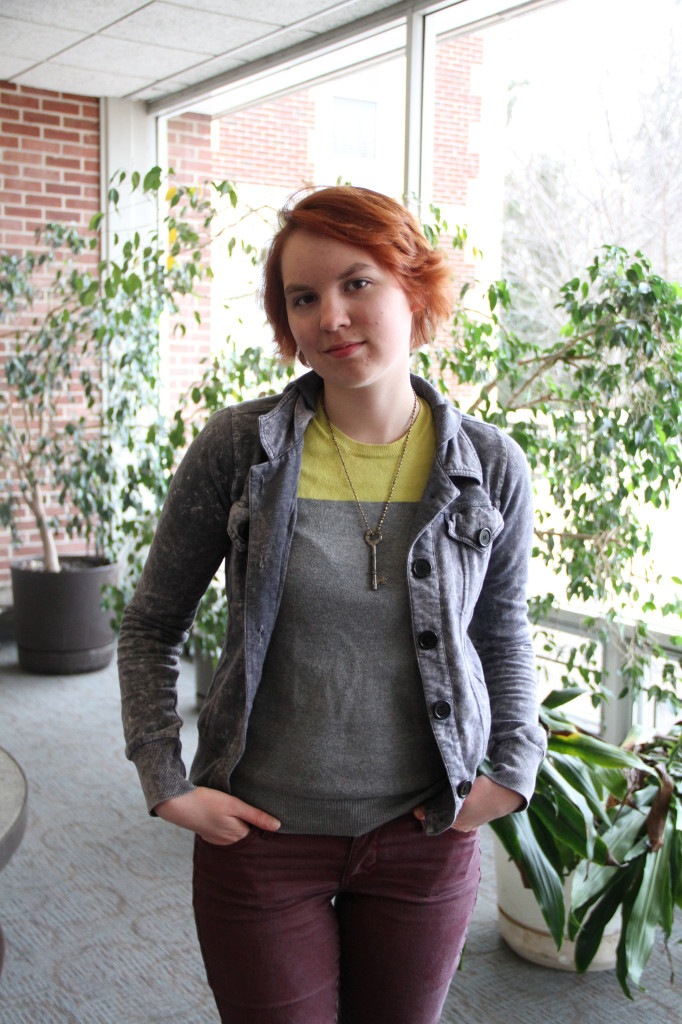 Zoie McNeil has a passion for animal welfare and is changing the way that people think about food.

For two months and one week in the summer, McNeill will live in a community with other interns in an isolated part of New York. The community will share kitchens and make their own food. They will also take care of the farm animals that Farm Sanctuary houses in their nearby shelter.

McNeill’s main job is in education, so she will help with office work, write for Farm Sanctuary’s website, and plan the “Hoe Down,” an event during which guests can meet the rescued animals face-to-face, listen to presentations by speakers and enjoy vegan meals.

“It’s going to be a lot of work, but I’m really excited,” says McNeill.

When she returns to McDaniel in the fall, McNeill will create a Compassionate Communities club on campus to teach others about the dangers of factory farming, animal welfare and how to connect with a vegan diet. She plans to set up a newsstand down in Westminster that will stock leaflets with information on vegan living. These leaflets will provide information on environmental and ethical awareness, what vegan goods to shop for and what ingredients to look for when cooking vegan.

McNeill stresses that you don’t need to become a vegan overnight – you can do it with gradual, incremental changes to your diet.

“I think it’s very apparent that the way Americans are eating meat right now is not healthy,” says McNeill. “I think that shows that there is something broken.”

McNeill hopes to abolish the apathy that others may have toward the food system and encourage others to help their health by cutting down on meat and consuming more natural foods while keeping a balanced diet.

Started by McDaniel students about a decade ago, Palabras to Words is an organization that offers one-on-one tutoring for Spanish-speaking adults who want to practice their English. Tutors make lesson plans based on the goals of these adults, who may be looking to strengthen their English to pass a test or apply for a job.

As a Spanish major, Amber Slater wanted to become involved with the Westminster Spanish-speaking community, which is why she joined Palabras to Words in her junior year.

Over the years, Palabras to Words has worked to become more inclusive to draw in the Spanish-speaking community. Recently they have incorporated childcare into their lessons, which has given more women the opportunity to receive tutoring. Originally an on-campus club, it has now been moved to the Boys and Girls club in Westminster to accommodate for the children.

Slater has grown close with her students in her time with Palabras to Words. Over Jan Term she tutored at a student’s house and got to know her and her children well over those few weeks.

Slater says that the strong, positive relationship that tutors form with their students is the best thing about the club.

“I feel like we’ve developed a friendship rather than a student-teacher relationship,” says Slater. “I look forward to seeing [my student] and working with her every week.”

Palabras to Words has big plans for the money they received from the Griswold-Zepp award. They are using $100 to buy pronunciation textbooks and resources to help their tutors learn how to teach effectively. The second allotment of money will be used for childcare materials. Since they use toys from the Boys and Girls club so often, they want to purchase new ones to share with them. The third allotment is for cultural events, such as dinners. The club is also in the process of putting together a cookbook with its students.

Palabras to Words is always looking for new members. If you’re interested in becoming a tutor for the Spanish-speaking community or working with children, you can write an email addressed to Amber at palabrastowords@gmail.com or email co-president Brandon Morfoot at blm012@mcdaniel.edu.

Sophomore Katarina Winhauer has always loved gardening. When her Honors Leading Change Class drafted proposals for the Griswold-Zepp award, she wanted to incorporate this passion into the project.

“A lot of times when a low-income family goes into a grocery store, they’re faced with the option between a couple fruits and vegetables and processed food because it’s cheaper,” says Winhauer. “That’s what [Better Food for a Better Future] tries to battle.” 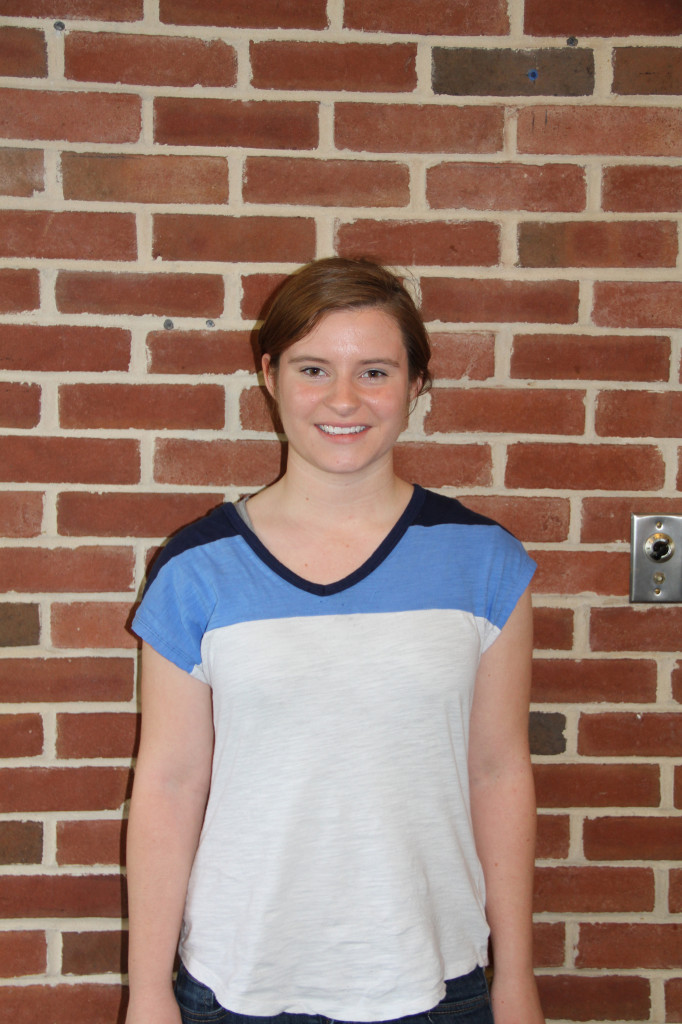 Kat Winhauer and her organization brings their passion for gardening to their community service outreach.

The group’s ideal outcome would be to give the garden more vegetables and plants all the time to provide for families. The garden is near Dutterer Park and consists of such vegetables as radishes, corn, and plenty of leafy vegetables like lettuce, spinach, and kale.

Human Services of Carroll County will collect the vegetables in the fall and distribute them to soup kitchens, shelters, and individual low-income families throughout Westminster.

Though this began as an Honors project, Winhauer would love for students outside the Honors program to be aware of the project and help out if they want to.

“The more hands helping, the more we’ll get done,” she says.

If you are interested in Better Food for a Better Future, you can contact Katarina Winhauer at kbw001@mcdaniel.edu.

Students give back to Westminster during Community Service Plunge