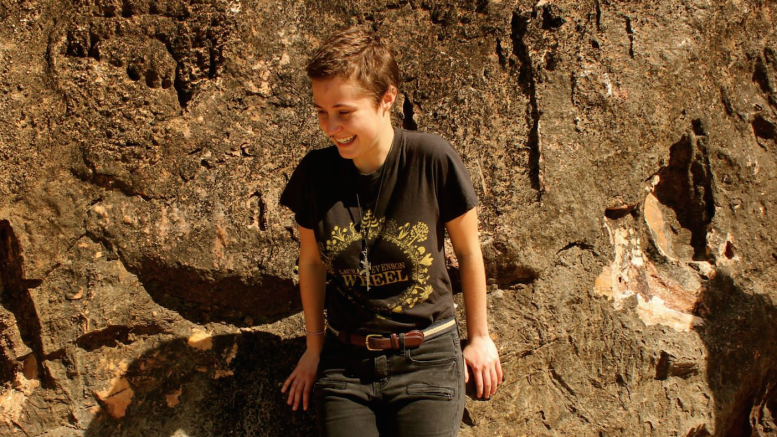 What is your preferred name and major(s) and minor(s)?
My name is Caroline Unger, and I’m a political science major with an Arabic minor.

What are some of the jobs you held at McDaniel?
I’m a food-service worker at Glar, and a resident assistant.

What organizations were you part of at McDaniel?
This year I’ve been a part of Music Meditation, DEEP, and most prominently, Progressive Student Union. In the past I’ve been a part of SGA, Maryland Student Legislature, Young Democrats, and Philosophy Club.

How much did you enjoy your time at McDaniel?
I thoroughly hated McDaniel when I first came here—I felt like I was surrounded by people I couldn’t relate to and stuck in Westminster. I fixated on my feelings of disconnection and frustration, and it prevented from me from embracing my experience here. However, leaving to do a year of school in New York City and Tunisia helped me to appreciate McDaniel so much more. When I returned to school, it no longer felt claustrophobic—but rather like coming home. I started to really appreciate the community of teachers and comrades I found here, the beauty of this campus maintained by my fellow workers, how stimulating my classes were, and the personal nature of such a small campus. After much reflection, I can sincerely say I am so happy I went to McDaniel. It was nothing like the college experience I had imagined for myself, but both the failures and triumphs I’ve had here make me appreciate this school so much–and true to it’s marketing pitches, it has fundamentally changed who I am.

Who do you think is/was your best mentor(s)?
I’ve had so many here it’s difficult to narrow down–but here are a few that I have doubt will stay in my life long after I graduate. Most prominently, Dr. Christianna Leahy has been a thoroughly wonderful adviser, professor, and friend to me. She has been a consistent source of support in my growth here on the Hill—both personally and politically. Her love of humanity and relentless optimism is unparalleled. Dr. Reanna Ursin and I started out on the wrong foot, but then our relationship evolved to be one of the most meaningful I’ve ever had with a professor. She had an immense amount of patience with me, and perpetually challenged me to think critically about the world around me. Dr. Carol Zaru is also one of the most powerful women I have ever met. Her immense humility and vast amount of effort she pours into her commitments is truly inspiring. She has always was so invested in supporting me academically in Arabic and and is a wonderful role model as a mother. All of these women are some of the best cooks I know (seriously incredible) and all have given me a sense of belonging here for caring about me so much more than just as a student.

What were some of the challenges you encountered and how did you overc0me them?
The last four years were full of them–but the union campaign at Sodexo was one of my biggest challenges. I doubted my own ability to organize, and challenging systemic power dynamics is exhausting and sometimes quite scary. The network of emotional and political support I had from the people that surrounded me—predominantly from my co-workers—was absolutely essential for the ultimate success. Fighting with my co-workers together to longer be complacent, but rather to be the authors of our own history felt incredibly empowering. Together, recognizing our collective power felt more rewarding than anything I ever learned in a classroom.

What are your plans for after graduation?
I plan to continue learning as much as possible, planting an herb garden, exploring this vastly complex world, learning how to knit socks, growing a community with those I love deeply, building working class power in whatever way that I will be most effective, writing lots of haikus, resisting the tendency to take on too much responsibility, eating a plethora of vegetables—and eventually, destroying capitalism.

What is your best memory at McDaniel? What is your worst memory at McDaniel?
My best memory at McDaniel is probably when my co-workers and I went public with the union. It was a moment that I could feel power shifting palpably in front of me, and I’ve never felt more connected to my co-workers with the subsequent winning of the election. One of worst memories I’ve had here is feeling so helpless and uncontrollably angry when my friend was sexually assaulted. I see the violence of patriarchy pervasive in our society hurt so many people around me and myself, and I’m always trying to grapple with what is the most effective way to direct my anger and sadness. There is no happy resolution from this memory, but drawing from Ira Zepp’s philosophy, loving each other always and in all ways is essential to support each other through all of the trauma in our society.

What advice can you give to those not graduating?
I’ve learned and grown the most from the times at McDaniel where I felt like I was overwhelmed, uncomfortable, and frustrated. For me, a perpetual avoidance of pain and vulnerability can prevent us to from finding what makes life meaningful—a deep connection with humanity and overcoming of the fears within us. My advice would be to continuously push yourself to fight for your passions despite the fear of failure, always try to build your ability to empathize and understand those around you, and always be immersed in self-reflection in order to grow and improve!

Anything else you want to share with the world?
In the words of an old dead white guy, “Where there is power, there is resistance.” Fight the power, and solidarity forever.