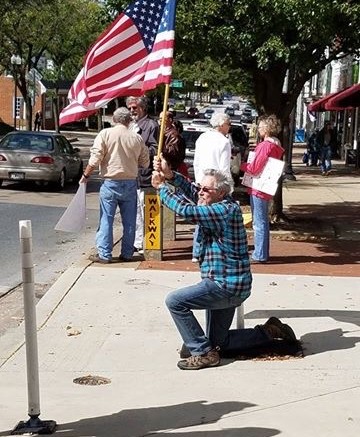 Every Saturday, professor Henry Reiff can be seen standing outside the Westminster Public Library eliciting cheers, car horns, and expletives from passersby as he proudly waves an American flag, untouched on one side, and with the words “Black Lives Matter” written on the other.

Reiff has served a number of roles throughout his years within the Carroll County community, and he continues to take on new ones every year. These roles range from upright bassist to Boys and Girls Club, board member to coordinator of McDaniel’s Graduate Studies programs, and include most imaginable roles in between.

While Reiff’s experience as a community leader and McDaniel professor and administrator is extensive, his focus has shifted onto organizing within the past four years. In response to Trump’s election and Muslim ban weeks after, and inspired by the Women’s March on Washington, Reiff began a movement to publicly oppose hatred and instead promote positive values: Patriots Resist.

Three and a half years later and fast approaching the critical 2020 election, Reiff continues to host Patriots Resist rallies every week, as he has “virtually every Saturday” since Feb. 2017.

The goal of Patriots Resist is to promote positive values and to advocate for policy and behaviors that Americans might be able to adopt to take the country in a better direction. Originally just called “Resist!,” Reiff quickly changed the name of the organization to “Patriots Resist”. “The extreme hate in this country has appropriated patriotism, and we need to take it back,” said Reiff.

Attendees, who gather outside the Westminster Public Library, display positive messaging about the America they want to see, rather than negative messaging about what they don’t. Signs at Patriots Resist rallies display messages that read “Science is real,” “Black Lives Matter,” and “Love not hate makes America great.”

Promoting positive and inclusive messages while proudly displaying patriotic regalia is a way for attendees to display their support for the American values that Reiff holds dear.

For Reiff, civil conversations and the pursuit of education are methods to improve the United States. “This country has to be about citizens working together and taking a position that they might not take individually but understand that for the common good, it is necessary,” said Reiff.

Furthering the common good is an essential motivator for Reiff’s activism, and doing so in Westminster has given him hope for the future.

“In Carroll County, a notoriously conservative area, I’ve found that there are a lot more people than I would have maybe imagined who really want to see things change in a positive and progressive way,” said Reiff.

According to Reiff, about 90 percent of people who interact with Patriots Resist protests are supportive, though 10 percent of passersby are “extremely hostile.”

Rally attendance has varied from just four people in the dark days of winter to over 300 people in the heat of the summer following the resurgence of the Black Lives Matter movement. Turnout continues to increase every weekend as stakes for the 2020 election heighten, as do the challenges that Patriots Resist members face.

In the summer of 2018, naysayers drove by and fired bottle rockets at the protestors, injuring a woman. At a Black Lives Matter protest that Patriots Resist members attended, an individual got into a physical altercation with protestors and was arrested.

Members have recently had racial epithets hurled at them. A few weeks ago, an aggressor on the street walked by and said “F*** Black Lives Matter, I hate N*****s.” Reiff said this is “not something you would expect in Westminster in 2020.”

Reiff has also had individual troubles with those who disagree with the pro-America protests. “This guy was yelling ‘white lives matter’, and I got into it with the person, and I felt ashamed. It was a reminder that we all have to work really hard to have civil conversations,” said Reiff.

Reiff remains hopeful and resilient moving forward from incidents like these, and the infrequent but staunch negativity of those who loudly disagree with the group’s positive messages of inclusion and patriotism. He recognizes that mistakes are part of the human experience, an understanding fostered through Reiff’s experience as an educator at McDaniel.

Reiff came to McDaniel in 1989, beginning his career as the Coordinator of the Graduate Program in Special Education. He has served multiple roles as a Dean in Academic Affairs, Student Affairs, and the Graduate Program. He is currently serving a sabbatical in his transition to retirement.

During his tenure, Reiff has helped launch online education programs, developed a systematic approach to graduate education, created a program for elementary STEM leaders, and developed the graduate certification program “Equity and Excellence in Education.”

Within the Carroll County community, Reiff’s roots run deep. Reiff is the former chair of United Way Carroll, a family stability nonprofit; a Boys and Girls Club founding and board member; a volunteer at the Carroll County Democratic headquarters; and a heavily-involved member of St. Paul’s United Church of Christ. He is also an esteemed musician, and has played bass with internationally recognized musicians in ensembles of varying sizes.

Reiff is in a prime position to pursue equity within the county due to his incredible depth of involvement as an activist and educator in the area. Civic involvement and social justice are key values to Reiff.

Reiff knows that there is still much work to do in creating a better America. “Protesting is the easy part. Making things happen is a lot harder. I do think that education is so much at the heart of this, and having difficult conversations […] not so much with people who believe what we do, but people who believe differently.”

While Reiff has hopes to “restore normalcy” after November’s election, it seems unlikely that he will stop his activist work any time soon.

“We need to hold politicians accountable to do what they say they are going to do or to make them do what we need them to do, whether they want to or not,” said Reiff.

Reiff hopes to take a break from weekly protests after November’s election, but he knows that he will be back out on the streets, regardless of what happens. “If Biden is elected […] I think we still need to go out. I think we need to hold Biden and the democratic party accountable,” said Reiff. “If Trump wins, I’m not taking a vacation.”

Dispatches from the Carroll County Detention Center: The Inmate Next Door

A Beginner’s Guide to Westminster