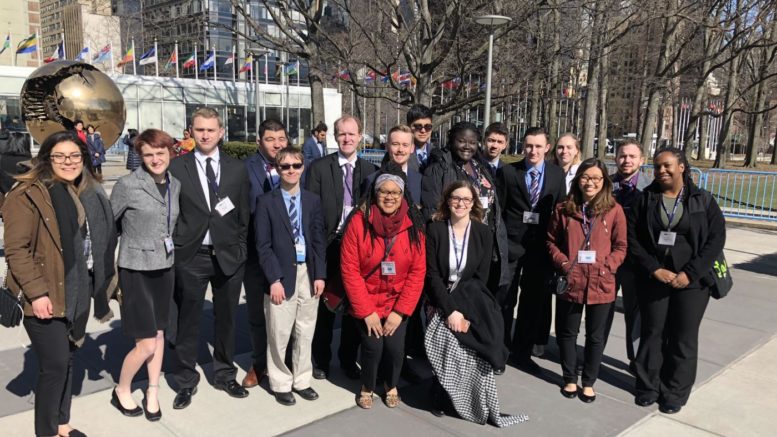 Want to explore New York City? Want to play the role of an international diplomat? Want to meet international students? Want to harness skills in debate and writing? Want to just try something new and build your resume?

Francis Grice, Ph.D., an associate professor of Political Science and International Studies, is looking for students to join McDaniel’s Model UN until September 24. “Model UN is a simulation that gives students the opportunity to work with fellow students at the college as well to meet others at other colleges to participate in an international simulation in which they are given the opportunity to think about some of the world’s most pressing challenges and identify logical solutions and achievable solutions to those problems based upon the perspective of an assigned member state,” Grice explained in an interview.

Members will participate in a conference held in Manhattan from April 3 to April 7. The team will be given a member state of the United Nations and an issue. The students will act as delegates of their assigned state and draft resolutions on the designated problem.

Students conduct research over the course of the semester to create a two-page “position paper” to present at the conference. Weekly meetings will be held every Tuesday from 5 – 6:00 p.m. to do this work and bond with fellow teammates. The workload is mostly contained to the meeting time, aside from occasional ‘mini assignments.’ Those who are either planning on or currently majoring in political science or international studies can earn one credit per semester of participation in Model UN.

The conference in itself is about three-and-a-half days, but the trip to New York is week-long. Because of this, students in the past were able to go on social outings and explore the country’s largest city. The hotel is in central New York, meaning students have the best access to the metro station, making the city much more accessible.

“I think that’s one of the biggest pulls for people to go,” Grice said.

Each participant will be asked to pay $650 to help cover transportation costs, hotel costs, and conference fees.

Though this year’s conference is only three hours away from campus, past meetings have been overseas. In 2018, McDaniel’s Model UN team traveled to Xi’an, China. They were supposed to go to Japan last year but, unfortunately, could not due to COVID-19 restrictions.

Wesley Brown is a McDaniel alumnus who participated in Model UN from 2016 to 2017. In an interview, he explained his concerns when first trying out the program. “They picked the wrong guy. I’m not smart enough to do this. I don’t know anything about Singapore,” he stated. McDaniel was assigned the country Singapore for the 2016 conference. Brown explained that he knew virtually nothing about the program and at first did not consider joining it, but his friends did and said it was worthwhile. He walked in with zero experience feeling overwhelmed with the tasks he was assigned. He knew nothing about Singapore and suddenly had to think about real-world issues as if he was a Singaporean diplomat. He went on in the interview to say those fears were quickly diminished. He advises those with the same preexisting worries to use all available resources at their disposal and take full advantage of excellent professors and the unique opportunities Model UN offers.

The skills he learned from Model UN significantly helped him graduate law school, and he is currently awaiting training to become a JAG officer. “I couldn’t have joined a better organization,” Brown said. Law school and his intended career require students to possess the ability to think critically about pressing issues and to communicate those complex thoughts in a digestible manner. “Model UN gave me an intro–a crash course–into how to think deeply,” he said.

Not just in law, but every job requires people to think and see the world outside their inner circle. Brown thinks Model UN was the perfect environment to harness this skill.

At a surface level, it seems Model UN is geared solely towards those pursuing careers in politics; but this is false. “Model UN needs students from other disciplines,” Brown said.

There are issues geared towards political-savvy in some years, but that is not always the case. “A number of the issues that we deal with are things that have dimensions that go far out the field of politics and international relations. So, for example, some of the committees look at things like women’s rights. Some of the committees look at things like the environment, looking at things like organized crime, and so forth. So even there, you’ve got environmental studies. You’ve got things to overlap in the English department. You’ve got things that connect [with] sociology. As you move more into the technical side, there is overlap with some sciences,” Grice said.

He mentioned a former student who majored in biology and got accepted into medical school. According to the professor, one of the reasons why the school wanted her on campus was because she experienced Model UN.

Dr. Grice explained how Model UN gives political students the chance to see what level of politics interests them most. Most students who join Model UN enjoy it so much they are willing to do it again. Those who decide not to do it a second time benefit from the program, even if they do not realize it. “It’s a good opportunity for them to identify if [sic] ‘actually I’m more interested in domestic politics, I’m interested in international politics,’” he said.

“I think [Model UN] is one of those things I think is great about a liberal arts colleges like McDaniel is the–you get this opportunity to try things. And there are–you know–people who are into the political science department [who are] domestic–going in a domestic focus–and discover [sic] actually they’ve got a much stronger international focus and vice versa.”

In previous years, roughly half the students in the program have done it before. This way, newcomers should feel safe and at home while exploring this new opportunity.

To learn more about Model UN and how to get involved, email Grice at fgrice@mcdaniel.edu.