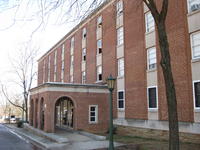 McDaniel’s got 99 problems and Rouzer Hall is most certainly one of them, or at least that’s what Michael Robbins and Ashley McCartney seem to think. A majority of the 174 residents of Rouzer Hall attended the mandatory meeting on Thursday night in Baker Memorial Chapel, which was announced earlier this week by Robbins, Director of Residence Life.

Amongst the crowd of young men was Dean Beth Gerl, who sat largely unnoticed until the quarreling of the crowd became too much.

“She had the guts to stand up and tell everyone to be quiet and to stop being stupid,” said freshman Lucien Joy. “She’s my hero.”

As most of the student body knows, Rouzer Hall is notorious for mass vandalism by select members of this year’s freshman class. Within one night, several walls were drawn on, water fountains were taken apart, and Area Coordinator McCartney’s door was stripped of all decorations – all typical for this past month in Rouzer.

By the time of the meeting, Rouzer Hall had approximately 138 work orders placed via housekeeping and personal requests through Physical Plant so far this academic year. McDaniel Hall is in second place with a much lower number: 29.

“The damage in Rouzer has not been this bad in several years” said Dean Gerl, to which Robbins added, “This is simply ridiculous. This is where you [boys] live.”

Although it’s been happening the entire year, assorted fruits being thrown out of the windows is what really caught Robbins’ attention.

“I know that the guys of Rouzer do a lot of what they might call games,” said Robbins during an interview earlier this month. “Many times we would refer to what happens as vandalism and damage.”

It doesn’t stop at childish games of throwing food, though. Last month, a student defecated in the second-floor showers and broken glass was strewn all over the fourth-floor showers.

The high amount of vandalism in Rouzer provoked Residence Life to send letters home to the residents’ parents asking them to talk to their sons, to have them step-up and report any actions the college would consider inappropriate.

During the meeting, several freshman boys voiced their other concerns to administration, some of which revolved around potential violence and what the future brings.

“If this [vandalism] is such a problem in Rouzer, why isn’t it transferred into other dorms as students move out?” asked freshman Yavor Antonov.

Another student expressed concerns about the potential of getting personally injured for reporting on whom the ‘phantom vandals’ might be.

Though the meeting had the potential to serve as a forum for debate, the administration saw otherwise. “This isn’t a debate, we’re just giving you information as to what’s happened,” said Dean Gerl.

At the end of the meeting, Robbins, McCartney, and Gerl agreed to what will happen. If Rouzer Hall isn’t damaged for a certain amount of time, freshman boys will finish out the semester without further reprimand. However, if damage occurs in the near future, Residence Life will issue a 24-hour quiet policy along with a no-guest policy.

Numerous students murmured disagreements and profanities under their breath throughout the meeting.

“They are treating the symptoms, not the problem,” said freshman Zach Royal. “To make this go away, the problem must be solved.”

So what is the answer? Security cameras would be an invasion of privacy and would surely be broken. Another option would be to have an officer from Campus Safety stand guard all night on weekends.

Or maybe the small number of students causing this issue could just stop.

A Guide to Greek Life