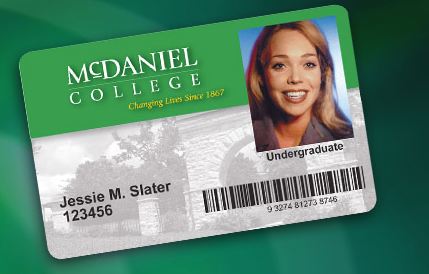 When students return to campus for the 2012-2013 Academic year, one of the many new additions that will greet them is the McDaniel1Card system.

McDaniel1Card can be summed up as transforming the student ID card into a full-fledged, streamlined debit card that can be used anywhere on campus and some places off campus.  For example, a student can use the money stored on their ID card for the laundry machines, the Pub, or even the new Convenience store being built.

A campus-wide email, signed by the Vice-President of Administration and Finance Ethan Seidel, was sent out a little less than two weeks ago, explaining many of the peculiarities about the new ID card system.  The letter also came with an attachment that allowed parents or students to add any amount of “McDaniel Bucks” to the ID card to prepare for the new year.

The variety of outlets one can use to add “McDaniel Bucks” are listed in the email as well, including web access on mcdaniel1card.com, mail access, and telephone access via 1-888-883-7003.

Unlike the old ID card system, the new McDaniel1Card will not come with a snack strip.  In fact, if you already have an ID card, when you go to the ID Card station in the Rec Lounge to get it recoded, you will have your snack strip taped off as it is no longer in use anymore.  Now all of your “McDaniel Bucks” stay in one place ready for use at any time, and not in two.

The snack strip was also flawed in that it was not attached to the campus database, making it impossible to keep track of or cancel.

On the process of creating the McDaniel1Card system, Seidel said that a lot of aspects of it have been talked about for a long time and students have wanted a change for a while.

To implement this change, McDaniel sought out a private card company called CardSmith to helm the new system and seek out stores and restaurants in the Westminster area that would be willing to accept “McDaniel Bucks.”

So far the three that have joined the McDaniel1Card system are CVS, Shoppers, and Mustang Pizza.  More are in the process of joining.

Even though McDaniel1Card isn’t the only improvement coming to campus this year, it is an important stepping stone to making the McDaniel College experience even better than before.

When asked on his favorite change to campus this year, Seidel said, “I don’t know if I can choose my favorite because they’re so different.  Back when the Dining Hall was renovated, that would have been my favorite, but I think all of these projects will have a great effect on campus.”

How to Get a Job on the Hill