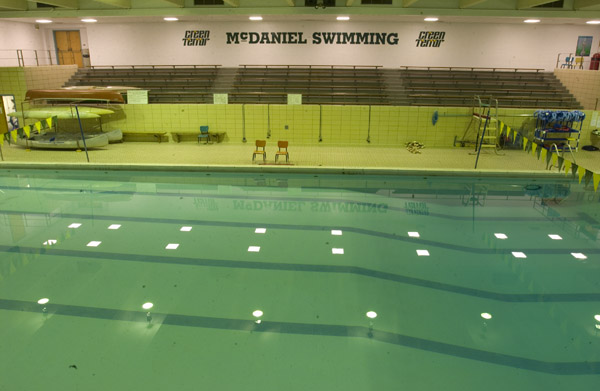 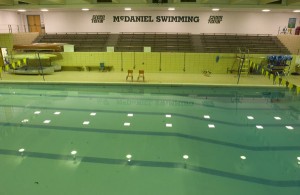 McDaniel’s Harlow Pool shut down in mid-August for renovations and reopened on the 23rd. More reliable wall-mounted showers were installed, the pool was drained, and the ceilings were pressure-washed.

“The men’s locker room was down to two working showers; and the women’s, three,” said Jeff Hiestand, head coach for the McDaniel College Swimming program.

With the last renovations taking place over five years ago, Harlow Pool was in need of some work. Physical Plant workers drained the pool and installed the new showers while the ceiling work was contracted out.

“Sometimes when multiple people had to shower and go to class it made it a little frustrating because not everyone was able to shower and get to class on time,” said Jono Leafblad, a Senior swimmer at McDaniel.

The McDaniel Swimming program, with an all-time high of 35 student-athletes, needs now more than ever to have facilities that operate up to standards.

Most everybody has experienced waiting impatiently while a roommate or sibling takes too long in the shower. Now imagine the stress of sharing five showers with over thirty of your teammates and having to hurry off to class afterwards.

“We are quickly out-growing our pool,” said Hiestand.

This concern is more than understandable when you consider the high volume of traffic that the Harlow Pool receives.

It is the only facility on campus that is used by faculty, staff, students, and every camp during the summer. Additionally, Harlow Pool offers children’s swim lessons and lap swimming to the community.

Junior swimmer at McDaniel, Patrick Rogers, stated that he really wished the pool had a sixth lane and newer starting and timing equipment. He wasn’t pleased with the current condition of the pool facilities and the recent renovations seemed to have helped alleviate some of the issues present in previous years.

“Ideally, I wish we could get a completely new, renovated facility that could rival some of the other pools in the conference, but we are working with what we have,” said Rogers.

Similarly, Coach Hiestand said, “I do believe the school will need to consider building a new pool sooner rather than later.”

Just as Dr. Casey pointed out in his recent State of the College address, potential students as well as their parents are quite interested in what the college has to offer in terms of facilities.