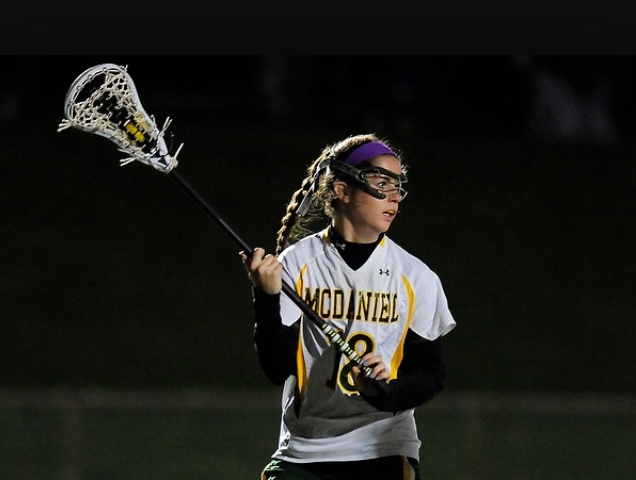 There was no time spent blowing out candles on Danielle Entrot’s birthday. The only celebration to be had was for a win against Muhlenberg. As the new record holder for career goals scored in McDaniel women’s lacrosse history, it was expected she play a crucial part in the outcome of the game. She scored career goals number 213 and 214, and the rest of the Terror women’s lacrosse team posed a valiant effort in Allentown. Yet they faltered to the Mules, squandering hopes for any birthday celebration.

The next was far less melancholy and more resembling of a birthday. Entrot and her teammates played a different sport, Frisbee, and they cared nothing for competition. Her teammates, roommates, and friends all laughed tempestuously as Danielle was on the receiving end of an unexpected Frisbee to the head, a rare flash of un-athleticism from the always-agile superstar.

“I didn’t want to win any more than I normally do because it was my birthday. I take every game seriously,” Entrot said. She paused, shifting her focus to catching and throwing the Frisbee.

“I try not to let it get in the way of other things. I’m serious about other stuff too; and some stuff not so much,” she chuckled.

A genuinely humble Entrot was not one to brag about her statistics, but her passion for the game is evident. That passion translates into success for her on the field. In playing 70 games in her career, Entrot has not only surpassed both the goal-scoring and the points records but is also within striking distance of the assists record as well. Entrot may not be one speak on her individual successes, but surely all of her opponents are aware of the consistent threat she poses on the field.

Retired from Frisbee for the day, Entrot now sat on her porch; she was joined by other teammates, one of which was four-year teammate and roommate Bridget Bopst. Bopst, not shy, gave more of a background on Entrot’s talents.

“She was really good from the beginning. Our freshman year, she played as much as anyone on the team. She had a 50-goal season that year, and it wasn’t lucky.”

The two are more like sisters than best friends, alike in ways but different in others. The chemistry seamlessly segues to the field, as the two have started every game together since the beginning of their sophomore year. Bopst continued on about Entrot, but began to elaborate on a more personal level.

Bopst, having already exposed Entrot’s not-so-secret of a nickname, received a wide-eyed look from “Trot,” as if to beg her to say no more. Yet, Bopst’s repetition of those three words, “she’s still Trot,” spoke more volumes about Entrot than anything else could have. She is not a stereotypical, egotistical record breaker. She’s just herself, and happens to be exceptionally gifted at what she does.

Entot’s offensive talent has been a necessary boost for the Green Terror women over her career, as their team goal production has increased every season since her arrival. She strikes quietly, shifting and finessing around the goal, watching how her teammates and defenders move around her. If you look away too, you’ll miss her find an open spot, receive a pass from a teammate, and rocket a shot into the back of the net.

“She’s obviously a force, but we have a settled style game. It’s a team effort. We have to create to get her open…. She would never say anything about herself scoring goals. She is very humble; it’s a great thing it keeps her focused,” said Kristen Ramey, the head coach of the women’s lacrosse team.

Coach Ramey knows her players well, and that Entrot’s humility would keep her from speaking on her own accomplishments. However, she stressed that Entrot asserts herself for the betterment of the team.

“She’s first a leader by example” Ramey said. “I think a lot of our team is that way, but we’ve been asking for vocal leadership. She’s been pushing her voice more every day. She steps up in the huddles and in practice.”

Entrot was the first to exceed 200 goals, as the previous record holder, Brittany Baer, finished her career with 194 goals.

She no longer has to worry about attaining individual milestones, if she ever did in the first place. Instead, the sights are set on the playoffs.

McDaniel’s Harlow Pool Gets A Facelift