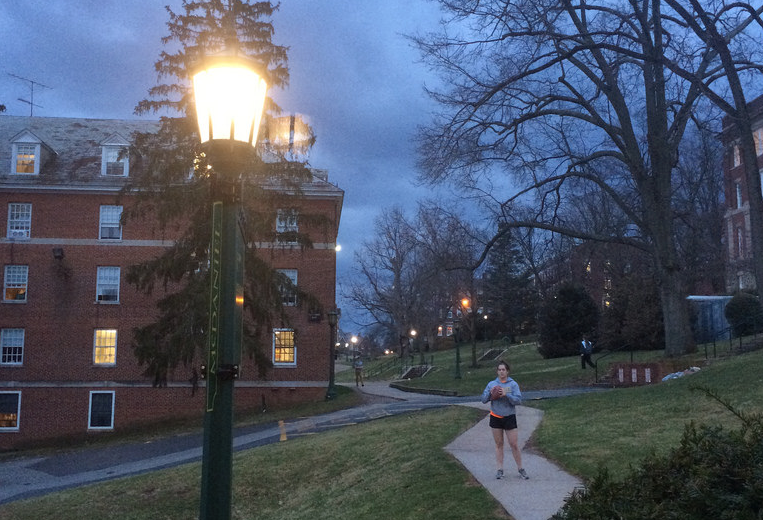 Throughout March, Residence Life hosted a campaign called You’ve Got the Power. The campaign is a contest between certain residence halls on campus to see which building can lower its energy consumption.

Blanche Ward Hall, DMC, Rouzer, Whiteford and ANW competed head-to-head in the competition. ANW’s power usage was compared to that of November while the others were compared to those of March of last year.

ANW clinched the win. Students living in ANW will receive t-shirts announcing their victory as prizes.

You’ve Got the Power is possible because of a Jessie Ball DuPont Fund grant the college received a few years ago. According to the fund’s website, they fund, “on a competitive basis, the very best ideas that come forward.”

McDaniel College’s journey to becoming more environmentally sustainable was one of those ideas. The money from the grant is being used to improve power usage on campus, including rewiring Glar and putting sub-meters on the bigger buildings across campus.

The Director of Residence Life, Michael Robbins, is leading You’ve Got the Power and is a fan of the sub-meters. There were only a few meters on campus before they were installed, which made a campaign like this impossible. The power usage by the residence halls could not be isolated since multiple academic and residence buildings were on each meter.

“I’ve had students come to me about trying to do a program, like a competition between buildings for power usage,” Robbins said. With the addition of the sub-meters, You’ve Got the Power was possible.

However, the campaign couldn’t be as simple as having residence halls compete in power usage.

Robbins said, “You can’t do a competition between buildings because ANW has 120 students and Whiteford has 210 people, but Blanche is air conditioned and the other buildings aren’t.”

The solution to that problem is having the residences compete against their predecessors. For that reason, it takes a few years to get the contest up and running. First, the sub-meters have to be put in, and then a year of gathering baseline data must pass before the contest is held. McDaniel Hall is not part of this year’s contest because they had problems with the sub-meters last year, so the data “doesn’t make sense,” according to Robbins. This year will be the baseline data that can be used in a contest including McDaniel Hall next spring.

Besides McDaniel Hall, ANW has also caused a hitch in the contest. On March 11, Robbins said of the first week’s results, “Rouzer used a little bit more power, but Blanche and Whiteford used a little bit less. ANW used a ridiculous amount less.”

That “ridiculous amount” is 32.8 percent. In comparison, Whiteford decreased their energy use the first week by slightly less than 13 percent and Blanche decreased by less than 3 percent.

Robbins explained the disparity with the fact that last summer, the ANW renovations included changing all the main hallway and stairway lights to a more efficient system. Since those lights are on all the time, it represents a significant portion of the power draw from the building.

“So yes, ANW is using a lot less power,” Robbins added. “But I have no way to tell you if that’s because students are turning things off or because the lighting is just better.”

For that reason, and to be fair to the other residence halls competing, ANW competed against their usage in November. They’re still ahead of the other dorms.

The campaign was held in March so there is time to gather the t-shirt sizes of the students in the winning residence hall and get the t-shirts to the students before the end of the semester. The prizes will be paid for by part of the Jessie Ball DuPont Fund grant awarded to the college.

Since this campaign was designed in part to be an educational, fun component to the grant’s use on campus, student opinion and participation is important. Robbins has heard supportive opinions from students but has aslso seen messages on Yik Yak saying to turn all the lights on.

Roxana Aviles, a sophomore living in Blanche, said, “I like the idea, but the reward isn’t enough incentive. I saw it once and forgot.”

Despite that, Roxana supports McDaniel becoming more sustainable and continuing to make choices that reduce the use of power on campus.

The You’ve Got the Power campaign and replacing lights is not the only way McDaniel has tried to become more sustainable. One method of producing electricity that the college has taken advantage of is called geothermal and, when done correctly, it can be harmless to the surrounding land.

“[Blanche] uses geothermal wells,” Robbins said. “Even though it’s air conditioned, the building could end up using less power than other buildings because it’s more efficient.”

There is consideration of placing geothermal wells elsewhere on campus. It is more environmentally friendly and has a good return on investment.

McDaniel’s journey to sustainability still has a long way to go, but they have recently made decent strides, but the success of You’ve Got the Power and the students’ awareness of their electricity usage is still to be seen.