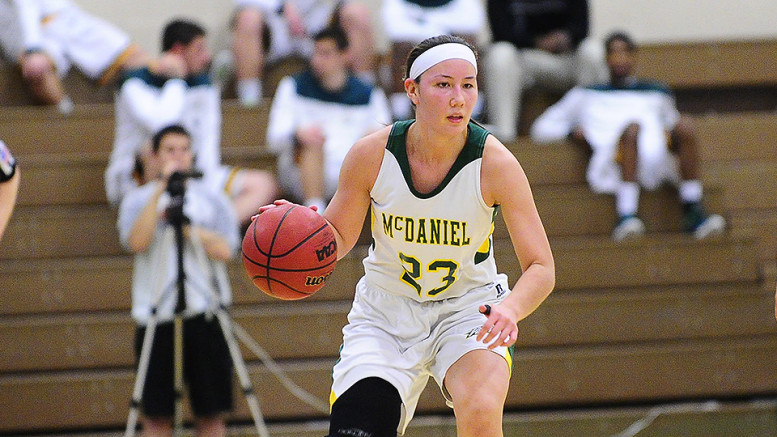 The Green Terror were consecutively outscored on Saturday, losing the Centennial Conference Final 83-59 to the reigning champion Muhlenberg Mules.

One night after handsomely triumphing over Gettysburg in the Semifinal game to take the rubbermatch, McDaniel (21-6) found themselves in trouble early on against conference-leading Muhlenberg (24-2).

Down by just five at halftime, McDaniel looked to fire coming out in the third quarter, but their efforts were silenced as Muhlenberg outscored them 27-15, extending the lead to 17 points.

The Green Terror got off to a strong start in the fourth quarter, going up 9-2 in the first three minutes.

After a Santone layup, two jumpers from Sarah Bach made it 4-2. Missed shots from the Mules and ateam foul allowed Karli Zeps to go to the line, extending the McDaniel lead to 6-2 with two free throws.

After the Mules’ second turnover of the game, Lindsey Nichols sunk a 3, the score now at 9-2.

Successful shots from Santone, Vallely, and Plotke, including the lead-taking three from Plotke, made the score 10-9 Mules with 4:25 to play in the first, forcing McDaniel to call a timeout.

The lead went back and forth for two and a half minutes before the Mules took it for good, going on a 5-2 streak to end the first.

More turnovers in the second gave McDaniel hope as they came within one at 20-21 after a Jasmine Smith 3, but four jumpers in the row from the Mules extended the deficit once more.

The Terror rebounded as best they could, going into the break down 35-30, after trailing by as much as ten just a few minutes prior.

The third proved just as sour as the first half as McDaniel started the period by missing three shots in the first 30 seconds, all on the same play.

Nichols attempted to bring her team back with two more 3s a minute later, making the score 39-36. But Muhlenberg once again took charge, ending the period having scored 12 more than McDaniel.

Scoring just 15 in each of the first three periods, McDaniel came out drained for the fourth quarter, adding just 14 to the board. Muhlenberg stayed strong and put up 21 for the win.

The McDaniel bench players made the impact they could, scoring 17 points while the Muhlenberg bench scored just six.

The Mules earned their spot in the NCAA tournament as Centennial Conference champions for the second straight year. McDaniel will wait until the NCAA selection show on Monday at 2:30 p.m. to see if they will earn their second at-large bid to the tournament. ECAC bids will also come out Monday.