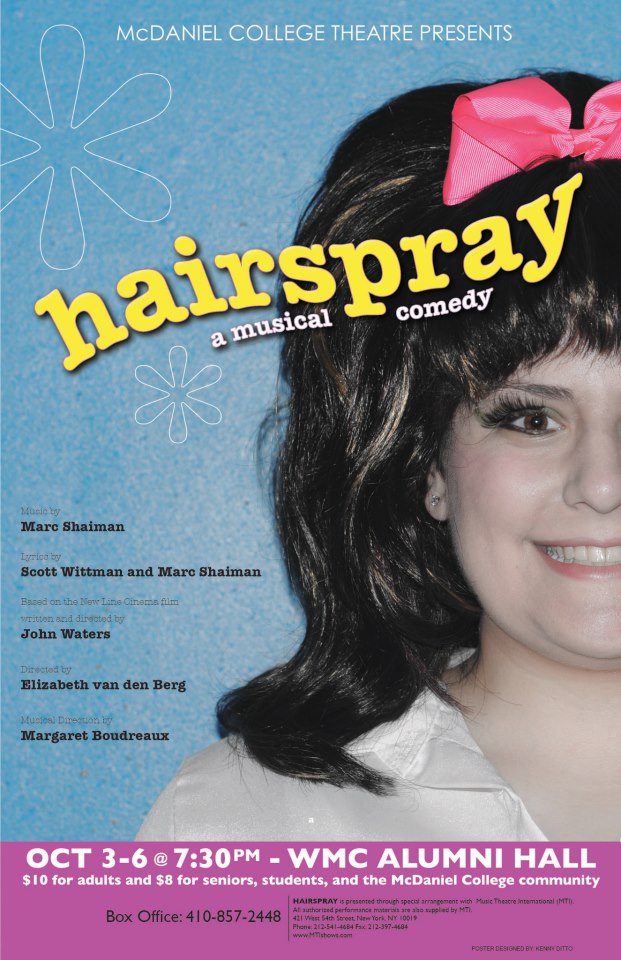 People were turned away at the door. There were no more seats. Ushers and concession workers, including myself, had to stand into the back to be able to watch. Hairspray was packed. Word of mouth has spread and the overall reaction has been overwhelmingly positive. This is a good show. A fun, engaging, show, as big as the hair on all the actresses.

I’ve heard snippets of all the songs before; I’ve seen the 2007 film. But I’d never seen the musical before, and it’s a completely different experience, not to mention a fairly different show. But it doesn’t take anything away.

Hairspray, directed by Elizabeth van den Berg, is the story of Tracy Turnblad, a big girl with big dreams. But you’ve seen that on every single poster littering the campus. In reality, Hairspray is a social commentary on the sixties; a show about kids who want to dance, but also about the hardships that face ordinary people living in segregated America.

Hairspray’s big scenes are set on the Corny Collins Show, a dance show similar to American bandstand, where pretty kids dance and sing for the youth of Baltimore. They’re all pretty, thin, and white. The producers of the show want to keep it like this, and they don’t want to let African-Americans on the show more than once a month, despite the talent that these kids have.

Tracy, played winningly by junior Kelsey Gondek, doesn’t just dream of dancing on the Corny Collins show and winning the heart of Link Larkin, teen heartthrob, played by sophomore Daniel Valentin-Morales. She dreams of dancing on the Corny Collins Show with all her friends, in a fully integrated dancing spectacular. She doesn’t see in shades of black or white; she just wants to dance.

Tracy’s supported by her parents, the goofy joke shop owner Wilmer, played by Junior Paul Davis Griffin, and the large, but loveable laundress Edna, played by Sophomore Kevin Anderson. The two of them portray a loving couple who don’t care about size… or wackiness, which is as stable as any other romantic relationship in the show.

The villains of the show, Amber and Velma Von Tussle, played by seniors Shelley Hierstetter and Karly Ziegler, embody the ‘evil white girl’ syndrome. I, for one, found Shelley’s portrayal of Amber to be one of the best parts of the show. She’s a mean girl, made mean by both society and her mother’s guidance, and she shows it by her hilariously, increasingly insane outbursts.

But one of the brightest points of the show was the portrayal of DJ Motormouth Maybelle, played by sophomore Chesney Jamieson. She’s a mother and the DJ of the Corny Collins Show’s ‘Negro Day’, and she shares Tracy’s dream of an integrated dance show – and an integrated world. Chesney plays Maybelle beautifully, and her voice soars, especially during the climatic ‘I know where I’ve Been.’

And overall, the message of the show is clear: It doesn’t matter what you look like, what color your skin is, or how large your waistline is. If you want to dance, you should dance. If you believe in something, and if you stand up for it, you can change things. A relatively simple message, but still a powerful one.

These songs will be dancing through your brain for the next week… and only that long, if you’re lucky. This is a fabulous show, with fantastic reviews from audiences, both student and out-of-town alike. I had a blast, even standing in the back. I hope you got a chance to see it. And if you didn’t… then you really missed out. Try renting the movie. It will not be the same experience.

New to the McDaniel Stage: “The Rivals”