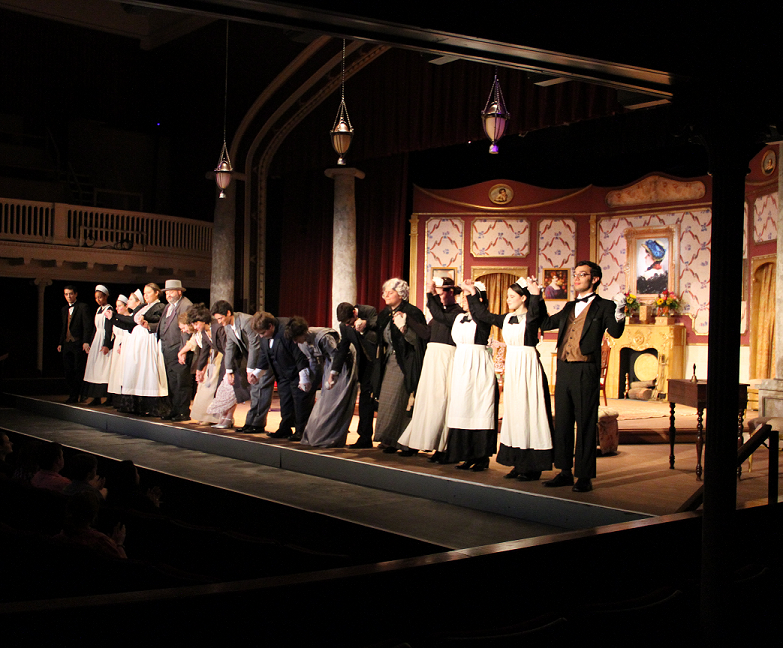 The McDaniel Theatre Department’s rendition of Pygmalion made its debut Wednesday Oct. 2 to a sizeable and well-responding audience.

Written by George Bernard Shaw and set in London, England in the early twentieth century, Pygmalion tells the story of Eliza Dootlittle, a low-class cockney speaker who is discovered by a phonetics professor, Henry Higgins. He is intrigued by the way she speaks and her shoddy attire. Higgins, played by Daniel Valentin-Morales, makes a bet with Colonel Pickering (Josh Harding), a linguist who has worked extensively in India, that he can transform the working class Eliza into a duchess in six months.

Scene two is set in Higgins’ house. At first, Eliza (Emily Wendler) resists the idea of learning to be a proper lady. After some bickering, considering and reconsidering, Higgins’ housekeeper, Mrs. Pearce (Alissa Beckett), is finally able to draw Eliza a bath and have her cooperate. Meanwhile, Eliza’s father, Alfred Doolittle, played by Kevin Anderson, stops by to take his daughter back. He even asks for five pounds for her. When Eliza is finished getting dressed up, she enters the room and her father doesn’t even recognize her. He gets his money and takes off, leaving Eliza in the care of Higgins and Col. Pickering.

Cut to three months in the future. Henry brings Eliza to his mother’s house to show off her progress. Some unexpected guests show up, though. Mrs. Eynsford-Hill (Sarah Hull), Freddy Eynsford-Hill (Adam Brett Greenhaus), and Clara Eynsford-Hill (Megan McCargish) make an appearance, and Henry has no choice but to present Eliza to them as well. When she makes her entrance, the audience is immediately able to tell that Eliza is not comfortable in her fabricated lifestyle. She greets all the characters and eventually engages in small talk with them, which she was instructed to NOT do by Higgins. In the end, Mrs. Higgins (Kelsey Godneck) concludes that Eliza is by no means presentable to high-class society at that point.

Fast-forward another three months into the future. Higgins, Col. Pickering, and Eliza have just returned from an ambassador’s garden party, where Eliza was able to pass off as a duchess, securing Higgins’ win in the bet with Col. Pickering. They are both relieved that their work is done and begin to express their true sentiments about the entire process, claiming it was “a bore.” Upon hearing this, Eliza feels hurt, so she decides to run away and escape because she does not know what else to do with herself.

The final scene is set in Mrs. Higgins’ house once again. Eliza is hiding upstairs, unbeknownst to Henry and Col. Pickering, who come in search of her after contacting the police. Eliza’s father makes an appearance, looking more dapper than he did when he originally visited Henry’s house. Higgins wrote a letter to a millionaire claiming that Alfred Doolittle was “a most original moralist,” which resulted in him receiving a considerable amount of money each year. He accuses Higgins of destroying his happiness because he was content with his former life. Eliza soon comes down and confronts Higgins and Col. Pickering. She acknowledges the fact that the colonel was always respectful to her and treated her like a true lady, in attempt to make Higgins jealous, since he always spoke to her as if she were below him. She accuses Higgins of taking her independence, but then questions why she gave it to him. Eliza then leaves with Mrs. Higgins for her father’s wedding after Henry asks her to make a purchase for him. She scolds him and tells him to get them himself, then exits. The audience never finds out if she does make the purchase, so it is open for one’s own interpretation.

The audience responded positively to the opening performance.

Freshman Mollie Murphy said the play was “surprisingly funny” and that she “liked how it was done.” She also mentioned that she thought the stage crew rotating the set was awesome.

From a cast member’s standpoint, sophomore Jennifer Litzinger, who played a maid for Higgins and a bystander in the first scene, said that she couldn’t believe how fast the show went by. “There was no giant disaster!” she exclaimed excitedly.

Director Elizabeth van den Berg said opening night went really well. The turnout “was good for opening night,” with an estimated 80 people in the audience. Van den Berg is excited to see “how [the cast] grow[s] throughout the rest of the shows,” and noted that opening night was the first time the cast had heard laughter during the show. They handled it extremely well and never broke character, she said.

Once again, the Theatre Department put on a fantastic production. McDaniel students surely are talented, and they do not disappoint (their British accents are impeccable!). Pygmalion will be playing in Alumni Hall every night until Saturday, Oct. 5. All shows begin at 7:30 p.m. The cost is $5 for the McDaniel students and seniors, and $7 for anyone else.