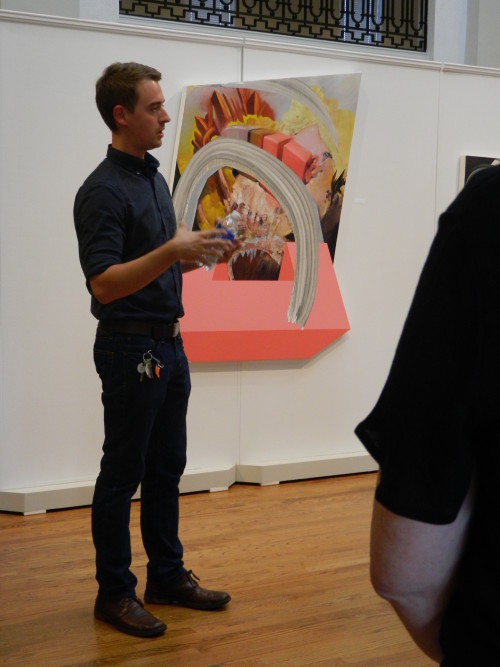 Kicking off the new semester with memorable forms and splashes of bright color, the first artist’s exhibition to don the walls of Rice Gallery in Peterson Hall is definitely one you won’t want to miss. The captivating and exciting works created by the artist, Evan Boggess, seem to exist in a new dimension somewhere between 2 and 3D. His paintings pull viewers into spaces filled with abstract forms and voids of texture and color – and appear to extend outward in vibrant geometric shapes. 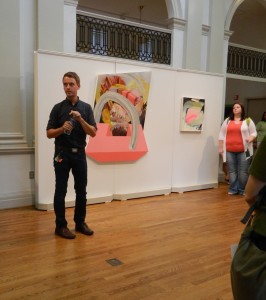 Evan Boggess next to MAGLEV, one of the pieces showcased in his exhibition.

For the artist’s opening reception at the exhibition on Thursday, Aug. 29, Boggess spoke about his paintings and how minerals and geology have inspired him to explore new ways of approaching his art. A mixed-media painter and 2011 graduate from Maryland Institute College of Art with an MFA, Boggess always knew his calling in art was abstraction. But he felt his works had begun to lack in direction until the Christmas his parents gave him a pyrite sample. “Alien-looking” with its mirrored, cube-shaped bit protruding out of an otherwise average-looking grey rock, Boggess described it as “an explosive new composition” – which provided just the inspiration he needed.

Fueled by a new found fascination with minerals and geology, Boggess took the concepts of pressure, heat and time, and brought them directly to the center of his work. Each, he explained, are conditions that shape the Earth’s mineral-makeup and also ones which shaped his paintings. From mineralogy to the art world, Boggess translates these three terms to fit his purposes: pressure refers to the compression of abstract forms on the canvas, heat to color, and time to the slow accumulation of paint layered on the surface.

Boggess begins each painting with an observational study of a mineral and keeps in mind its nature as he shapes his canvas and puts down the first few bold strokes of paint. He intends to uncover them later – after so much oil, acrylic, and spray paint has been layered that the composition becomes unworkable. He then uses subtraction to take away (chipping, peeling, etc.) to uncover those first few markings.

In reflecting on his process, Boggess acknowledged that it does put a lot of pressure on him “to make every square inch perfect” – especially in light of the fact that many, if not most, of his paintings are not very successful. But like a true artist, he also notes that “if everything went according to plan, the painting would be boring.”

The event was clearly a success as a large attentive crowd of students and faculty were present, avidly snapping pictures and taking notes during his presentation. Afterwards, he took questions from the larger group. Even after it had dispersed and people were free to look around, a few were always seen waiting nearby for a chance to talk to the artist. When asked, “What next?” Boggess replied that he would “probably continue to ride the mineral thing for a while” considering it is such a broad theme and he has only just begun.

The artist admits his personal favorite is MAGLEV which really encompasses the illusion of space and form he achieves in these paintings. Immediately one is drawn to a large grey arch and pink rectangular shape that seem to be both within the composition and extending out toward the viewer. The space is ablaze with warm hues in spikey red-orange towers and yellow sulfuric-looking clouds while several block shapes hover behind the arch. Nothing representational is shown yet somehow the space achieves a kind of depth. Boggess would tell you there is nothing physically sculptural about his works, that they are simply unique paintings. What he means to do is “create paintings that behave like sculptures” and manage to achieve that illusion of space.

The exhibition will be up in Rice Gallery until Sept. 20 so make sure to stop in before then to experience unique and exciting art!