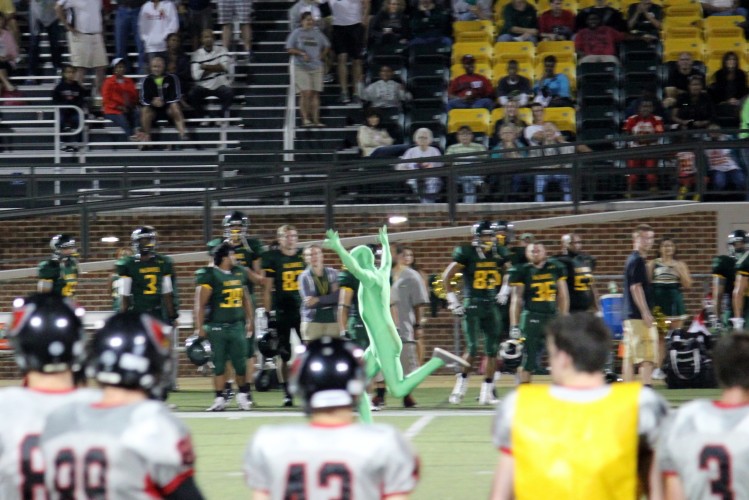 Anyone who attended Saturday night’s football game against Catholic knows about the unexpected surprise at the very beginning of the fourth quarter: someone clad in a tight, neon green full-body lycra suit took to the field. The student, whose chest bore a large “M” in Sharpie, drew immediate attention from the crowd as he bounded past confused players beneath the lights. The Free Press was granted an interview with the “Greenman,” an unnamed McDaniel junior, in hopes of understanding the motivation behind the daring mid-game dash. 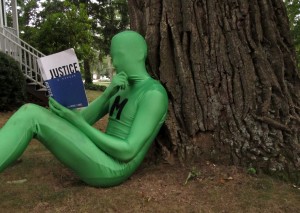 Greenman contemplates justice as he considers the possible consequences of his daring dash.

What are the origins of the “Greenman”? Why wear the suit to begin with?

I guess it all started with the show “It’s Always Sunny in Philadelphia.” If you’ve seen any of the episodes where they go tailgating, Charlie puts on a green lycra full-body suit and dances around in it.

I bought it during my sophomore year of high school and wore it to basketball games at halftime. I got the crowd pumped up, I ran around the court, and just did general mascot-y things.

I brought it to McDaniel, but have only worn it once before. I was actually on the Weather Channel briefly, shaking President Casey’s hand and showing him my McDaniel swagger.

Why did you run out onto the field?

I ran out on the field because I felt we really needed a boost that night. We were losing, I believe, 43-3 at the time I ran out. I was going to run out at half-time, but I felt like there was too much of a lull. There was too much time and it wouldn’t have had much of an effect. I ran out to boost the school spirit and, I guess, to make a spectacle of the night game. They scored a touchdown right after.

Walk us through the actual process of running out.

Well, I put on the suit sometime around the eight minute mark of the third quarter. I milled around for a bit, talked to some people; some people asked who I was and I said, “no comment.” Around seven seconds before the end of the third quarter, I crept away from the crowd and made my way to the left side of the field.

I then started charging for the field, hit an initial fence, and fell over in front of a Campus Safety officer, who asked if I was okay and helped me up. Then, I just went for it! I hopped the first fence, sped out across the field, juked out an opposing football player, got across, and jumped across a second fence. Then, I ran immediately into the tennis courts- not into them, but into them. I hit the fence. After that, I decided I needed to get out of there and I ran toward what I believe to be the golf course (because I can’t see anything in that suit).

After I made it what I considered to be a decent distance away, I stopped to take a breather. An ROTC individual came over and shook my hand as I took off my suit….and the field officials were right behind him with Campus Safety. I was escorted home. 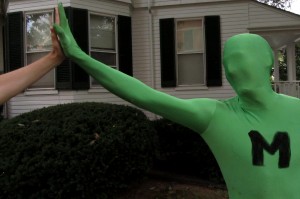 Greenman shares a moment with one of his enthusiastic supporters.

What went through your mind as you ran across the field?

Will we be seeing more Greenman around campus?

But for real, he’ll probably be back.

2 Comments on "It Ain’t Easy Bein’ Green: An Exclusive Interview with Greenman"