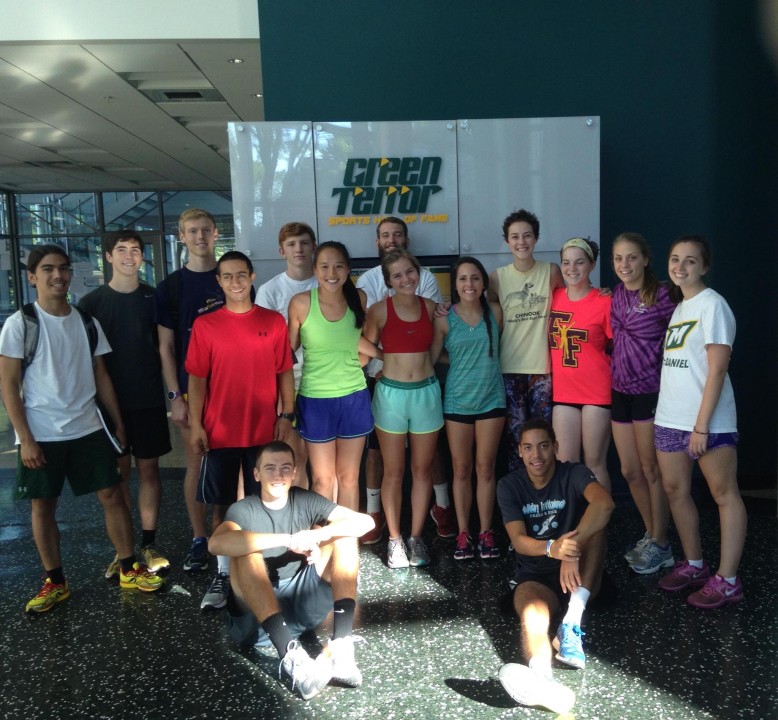 The 2015 cross country team after one of their preseason practices.

Preseason training kicked off with double sessions at 7:00 a.m. and 7:00 p.m. These practices included a medley of long runs as well as hill workouts.

“We are doing things differently this season” assistant coach Keith Lindsey explains. “We want the runners running strong, and injury free. This means being in the gym twice a week, working on core strength with resistance bands and free weights.”

Mimi Lawrence, and Kelsey Minyon, both senior runners on the women’s team, say that overall there is more focus and camaraderie among the team this season.

“Everyone here wants to be here,” Minyon says.

“We hope to see everyone run as a team and run strong,” Lawrence adds.

Senior Chris Jones and junior Jim Heilman want to see the team contend in the conference.

“I’m excited to see some new faces,” Heilman says. “We want to pick up where we left off last year, keeping consistent efforts in our training.”

“We have what it takes to close the distance between the rear, and front of our pack. We can push forward, and run as a team,” Jones adds.

Head coach Doug Renner says the philosophy will be traditional this season.

“We are maintaining quality over quantity. The important thing is that the runners are working hard, and able to find balance in recovery and study as well,” he explains.

The team looks forward to the season of training, and racing that lays ahead, in hopes of crossing the finish line stronger and faster than when they started.