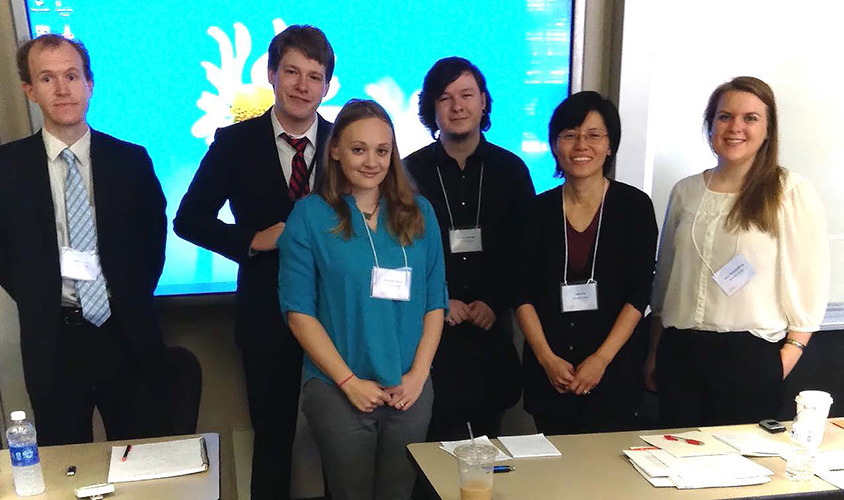 While the summer season on The Hill was in full swing, some members of McDaniel were still hitting the books and conducting research for projects that were presented at the Asian Studies on the Pacific Coast Conference in California on June 5th to 7th, 2015.

The Asian Studies on the Pacific Coast (ASPAC) Conference is a regional conference that was hosted by University of the Pacific in Stockton, CA for 2015. The conference consisted of 106 presenters including international undergraduate, graduate and doctoral candidates from several different countries such as South Korea and China. The conference offered an excursion to the Wat Dharmararam Monastery and Cambodian Heritage Community Center where participants toured the Buddhist statue garden and talk with the resident monks about their art and daily life. This tour stimulated cogitation of Asian studies and appreciation of Cambodian culture.

The experience I received from this conference is unlike any other conference I have been to. I haven’t had the opportunity to study the Asia-Pacific in my academic career and co-authoring the paper I presented with a faculty member and another McDaniel Alum helped me to work better on a team, as well as to research an area about which I now have a little more familiarity. Attending other presentations of graduate students and of doctoral theses relating to Asia-Pacific was enlightening and proved that advanced studies are not intimidating. During the conference banquet, one speaker noted that to be an Asianist means to have a genuine interest in multi-disciplinary research in the many different cultures found in this region of the World, something that I have learned firsthand through this conference. Presenting our paper to such a knowledgeable group of scholars was engaging and inspired me to continue my studies in the Asia-Pacific and one day become an Asianist as well.

2014/2015 was an exciting year for students interested in China and the Asia-Pacific in the department of political science and international studies at McDaniel College generally. In addition to the above conference, students have undertaken elective courses on the Politics of China and the International Relations of the Asia-Pacific, enjoyed film evenings showing Chinese and Japanese films, and gone on a field trip visit to the Laogai (Chinese Prison Labor Camp) Museum to meet renowned human rights activist, Harry Wu. After spending 19 years incarcerated in a Laogai, Harry Wu moved to the United States, where he now runs the Laogai Foundation in Washington, D.C., with the goal of investigating and raising awareness about secret prison camps and human rights abuses in China.

Students who are interested in learning more about politics and international relations in the Asia-Pacific during the coming academic year are encouraged to look into two courses being run in the Spring Semester by the department of political science and international studies. These are PSI-3325: International Relations of the Asia-Pacific and PSI-3365: Politics of China. First-year students joining the college in the Fall Semester will also have the opportunity to take an FYS on the topic, entitled FYS-1180: Understanding China. Multiple other departments also offer other courses on China and the Asia-Pacific.

60 Seconds: “After the honeymoon period, what do you think about the new Glar now?”