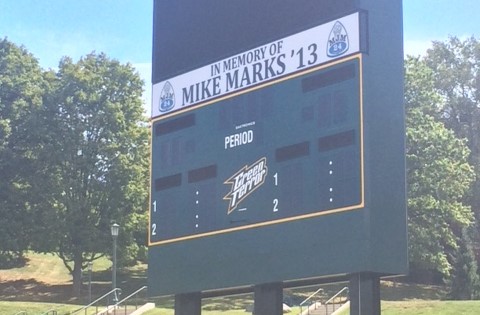 Entering the 2016-2017 school year at McDaniel, there is much excitement around the new turf field. The facelift, which was estimated at well over $1 million dollars, welcomes back students with a new state of the art scoreboard for their athletic events. The top of the scoreboard reads, “In memory of Mike Marks ’13,” but many current students have never heard the story of who Michael was, and why he was so important to our campus.

Michael Marks was a two-sport athlete at McDaniel College, who played football and lacrosse. Lacrosse being his main sport, Marks was a captain of the team his junior and senior year.

Michael was pronounced dead on June 20, 2013, due to a terrible car accident. Michael and his friend Warren Kraft were thrown from their car at 2:55 a.m., after losing control going at a high speed.

This weekend, at the home opener football game, McDaniel will be dedicating the new scoreboard. Coach Euker spoke about what this weekend means to him and the Green Terror lacrosse team, saying “This weekend we will be on the field with Michael’s family during halftime, and after the game have a cook out to celebrate his memory.”

The MJM24 Foundation, which is a foundation formed to honor Michael, announced the dedication on their Facebook account, “We hope you can join us on Saturday, September 17 at McDaniel College for the scoreboard for Mike dedication. The dedication will take place at half-time of the McDaniel vs Muhlenberg football game. Game time is 2 p.m. Whether or not you are able to be with us there, please pray for us on that day. Thank you.”

There is no doubt that Michael is always on our minds, but especially this weekend. Michael was an involved leader, and scholar of the McDaniel community. We will continue to remember the great times we spent with him.

Who will get their Man(ning)