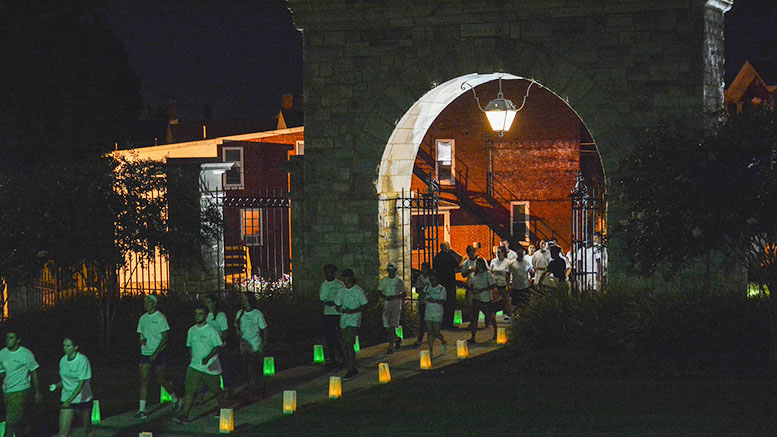 McDaniel's Class of 2020 walks through Ward Memorial Arch on Move-in Day. Many can expect to graduate with student debt. Photo by Kyle Parks.

As student debt rapidly passes $1.3 trillion, it’s becoming increasingly clear that higher education in the U.S. cannot go on as it is. The costs associated with obtaining a degree are expanding markedly faster than inflation, and certainly faster than stagnant wages of many Americans.

The reasons for this are numerous. Colleges are known for engaging in an “arms race,” i.e. lavish spending on construction/renovation projects to attract students. Additionally, there’s always talk of sprawling administrative staffs with substantial salaries. A relatively guaranteed income stream from federally backed loans allows students to “follow their dreams” and work better jobs for higher wages, while also enabling institutions to raise their fees without as much fear of falling enrollment.

With the great issues facing those seeking degrees, calls to make college affordable have grown ever-louder – citizens are calling for tuition-free college as part of a larger discussion on reducing student debt. Democratic presidential candidate Hillary Clinton has latched onto these. Yes, college free of tuition is a fundamentally great idea, but eliminating student debt entirely proves to be unattainable in the U.S. as is with many other nations.

Even Sweden, considered by many as an exemplar of social democracy, encounters student debt. In her New York Times article exploring the topic, Susan Dynarski brings up the fact that 70 percent of Swedish students, a comparable percentage to their American counterparts, borrow to further their education. Swedes are expected to leave their parents’ house at 18, and must cover their living costs somehow, which is where government loans kick in. After graduation, students can expect to gradually pay off their loans over a period of 25 years.

An area in which the U.S. differs from similar nations is in its repayment plans. Dynarski notes that “The repayment system in the United States was built when students borrowed little; many did not borrow at all.” In many other systems, student debt payments operate universally through payroll deduction and adjusting automatically as a percentage of a borrower’s income in a fashion akin to social security payments (which is a model Clinton seems to promote).

Germany, also often drawn as an admirable model that the U.S. “ought to follow,” has its own struggles with tuition-free universities. Jon Marcus reports that the 2014 elimination of tuition in German universities led to a 22 percent increase in attendance, while vocational programs shrank, increasing the tax burden for funding universities by 37 percent.

And this still hasn’t footed the entire bill. Even as German universities see overcrowding and stretching of resources, zero tuition remains precarious with the impending 2020 Schuldenbremse (debt brake), which will limit how much money German states can borrow. Even now, though, 68 percent of German students work while attending university to cover their living costs.

It appears that Clinton’s plans are closer to the European models so championed by many. Clinton seeks to eliminate tuition for those with family incomes below $125,000 by 2021. While there are some issues with this, such as different levels of education subsidization per state and the potential for public institutions to become much more selective—blocking out disadvantaged students—as well as overcrowding and the inevitable failure of many private colleges, this will potentially be helpful to those seeking degrees.

Where we are being foolish is thinking that higher eduction can be debt free. Clinton’s plan covers tuition only, and not room and board, just as living costs aren’t covered in European nations with no tuition. Additionally, some may be surprised to find that Clinton’s plan seeks to involve all levels of universities in cost-saving measures, including students. Provisions include students working 10 hours per week. Clinton, however, also seeks financing via limiting certain tax loopholes on high earners – potentially society at large will not be bearing the full cost of this shift.

Overturning tuition would certainly benefit many, but to think that it would overturn the problem of student debt altogether is a faulty assumption.

From Student to Employee: Erin Giles and the First Stop Office