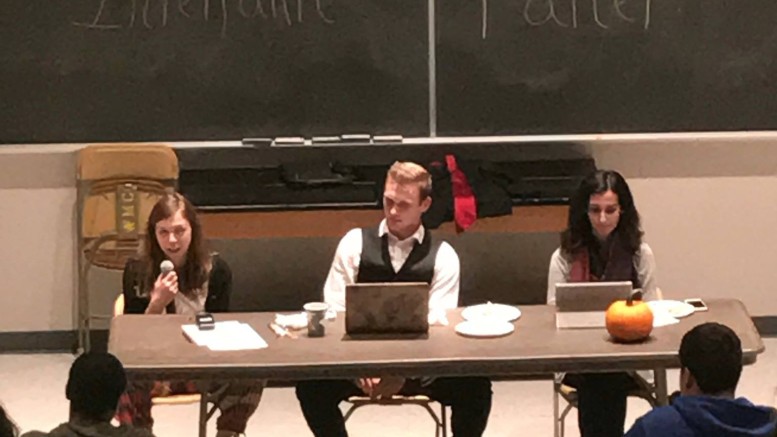 On Nov. 10 in Decker Auditorium, an Interfaith Panel took place as Christian and Muslim students talked about their faiths to promote greater understanding of them.

Sophomore Carter Trousdale originally had the idea for the panel over the summer. The event was sponsored by the Office of Residence Life, the Muslim Student Association, and InterVarsity Christian Fellowship.

According to Director of Residence Life Michael Robbins, McDaniel’s Residence Life Team is a member of the Association of College and University Housing Officers- International (ACUHO-I), which provides a self-assessment guide for its members. When Residence Life went through the guide last year, it turned out that spirituality had been overlooked. The team resolved to change that, and laid out the groundwork for that change during training.

“Each area coordinator,” Robbins noted while describing the process, “had to do two events that had something to do with spirituality.”

Once this process had started, Residence Life reached out to various students to figure out who would agree to be on the panel, and thus the Interfaith Panel was created.

Aided by Trousdale, moderator and member of Residence Life, senior Rachel Snack and sophomore Rowail Khan, representing Christianity and Islam respectively, covered a host of religious issues. These ran from creation to the apocalypse and included more difficult subjects as well.

The discussion began with a nod to Judaism. The trio apologized, saying that it unfortunately could not find someone for the panel.

The two speakers then gave a brief overview of their religions. Snack emphasized the Church as “a giving and selfless community.”

Khan began her introduction with emphasis on differentiating between the terms “Islam” and “Muslim.” Above all, she proclaimed Islam to be a religion of peace.

After the initial introductions, the two panelists discussed creation. They then proceeded to talk about the different beliefs regarding Abraham, an important figure in both religions. Lastly, they went into considerable depth regarding the end times and ethics.

The night then turned to different topics, with Snack and Khan talking about homosexuality, Sharia law, separation of church and state, and jihad. Lastly, both of them talked about the role of women in their faiths, and strongly affirmed that women had a role to play.

After talking briefly about important holidays in both religions, the panel opened up the floor for questions. This brought a more personal element to the fore, especially when talking about doubt. Snack validated that doubt can play an important role in faith.

“Doubt is a real thing,” she emphasized, and Khan followed up by musing that, ever since she was a child, “I always asked, ‘Why?’”

While sophomore Rosa Robertson, who attended the event, admitted that although most of the information of both faiths had been covered in her Religious Studies class, she liked that the panel focused on controversial topics, noting that, “there were pieces that it was really good that they brought up.”

All panelists expressed enthusiasm regarding turnout at the event and hoped to hold another in the year to come.