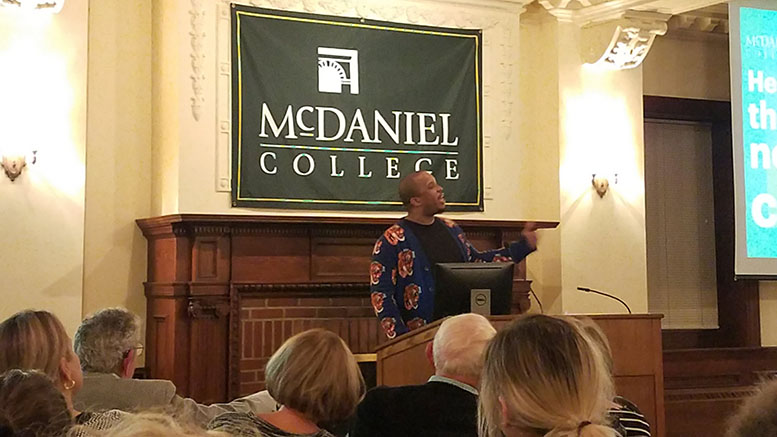 Dwight Watkins, published author and writer, presented his case as to why there needs to be an exchanging of skills at the very core of our society in a lecture entitled, “Beyond the Internet: Why Quantifiable Goals Trump Hashtags,” in McDaniel’s annual Ridington Lecture on Feb. 27.

Tuesday’s lecture began with Watkins’ story of rise, one that started on the streets of East Baltimore and catapulted him to be one of the leading voices of reporting on the “crack epidemic” and neglect of the urban poor as well as a role model for city kids of similar upbringings.

For Watkins, the problem starts with schools. Speaking from his own life experiences, he says that neither he nor his friends read any of the books they were offered before seventh grade. He continues, almost coyly laughing, “None of my friends and I were interested in reading Mark Twain.” According to Watkins, oftentimes for kids that are growing up, being exposed to an informal slang-filled dictionary, books with familiar ideas, words, and plots should be used to foster an early love of reading.

Watkins offered serious and pointed statistics: “Black people make up 13.3 percent of the population of this country, but are only represented in 1 percent of literature.” Given to him by a nurse while he spent a stint in the hospital, the first book he read that really ignited his passion for reading was “The Coldest Winter Ever” by Sister Souljah.

From there, Watkins went on to talk about his writing career and how that afforded a healthy way to express himself and work proactively with disadvantaged fellow members of his community. Over the past few years, Watkins has worked to get his books into city schools and has written articles like rapper profiles, stories that are culturally relevant to the youth in the community, giving back in more way than one.

In a segment pertaining to act of protests perpetrated by activists, Watkins made the comment that the days of a movement led by a Martin Luther King type figure are over, and instead people should be directing their goals towards jobs with within the city that have long lasting effects on the well-being of the community. Watkins recommends his book “The Beast Side” to first-time readers of his.