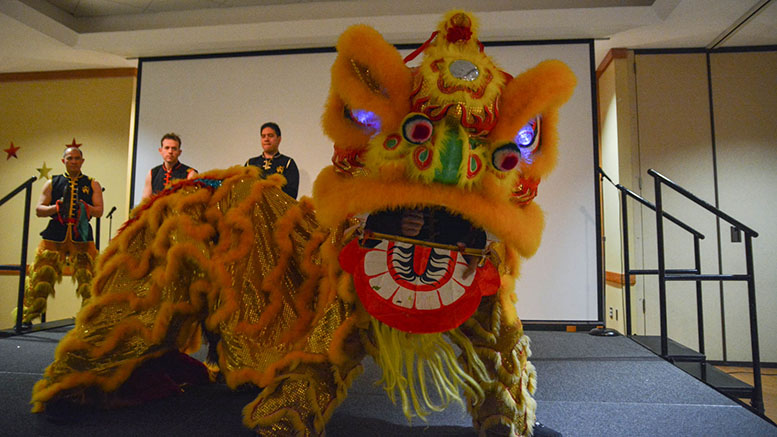 Taste of Asia, hosted by the Asian Community Coalition (ACC), returned to campus again this year on Feb. 22. The theme of the night was “Asia Through the Ages,” and it included music, song, dance, food, and more, featuring countries all around Asia. Abigail Rose-Craver (the President of ACC) and Phuc Truong were the hosts.

The night began with a Lion Dance, courtesy of Tai Yim Kung Fu. The Lion Dance is a traditional part of Chinese Lunar New Year celebrations, and tells the tale of a fearsome beast that used to terrorize Chinese villages every new year, until they poisoned it with magic lettuce and turned it into an ally. After the performance, volunteers were welcomed up to the stage to try the dance themselves, and to take photographs with the lion.

Meanwhile, the buffet of food was opened, with a variety of foods provided by Ying Thai Cuisine of Westminster. These buffets, located on either side of the Forum, contained vegetarian green curry, white rice, pad thai (with both chicken and tofu options), and fried chicken, with a variety of sauces and toppings available.

Following the Lion Dance, a TED video was shown about the Chinese Zodiac, both in the context of ancient beliefs, as well as how it plays an important role in Chinese culture today.

Continuing, Rose-Craver and Truong read a poem, “Ong Do” or “The Calligrapher” by Vu Dinh Lien, a Vietnamese poem about traditions and passing them on to future generations.

Following the poem was a demonstration of the traditional Korean game “Dibidibidip,” which is basically a full-body version of rock-paper-scissors. Eight volunteers were then brought up to the stage to compete in a brief tournament.

There was then another short break in the programming for dessert: cupcakes and coconut ice cream.

The next performance was by the Intermediate Chinese class, which performed a Chinese version of “I Want It That Way” by the Backstreet Boys, as arranged by Jill Chen. Following the song, the Belly Dance Club performed a selection of pieces.

A game of Kahoot trivia followed, with 10 questions about Asian culture, geography, and entertainment. Each table competed as a team, and the winning group received coupons to Ying Thai Cuisine.

The last of the performances was a series of dances set to modern music, choreographed by Jacqueline Yarwaye.

The night ended with closing remarks and a surprise giveaway, as guests were invited to look under their chairs, where one person at each table would find a card telling them that they were the winner, and would be able to take home the table’s sand garden centerpiece.

ACC will be hosting a few more events this semester, including Calligraphy Cupcakes and Asia Café, and will be co-hosting United with some of the other cultural groups on campus. They also welcome new members and hold meetings in Hill 104 at 7 p.m. every Monday.