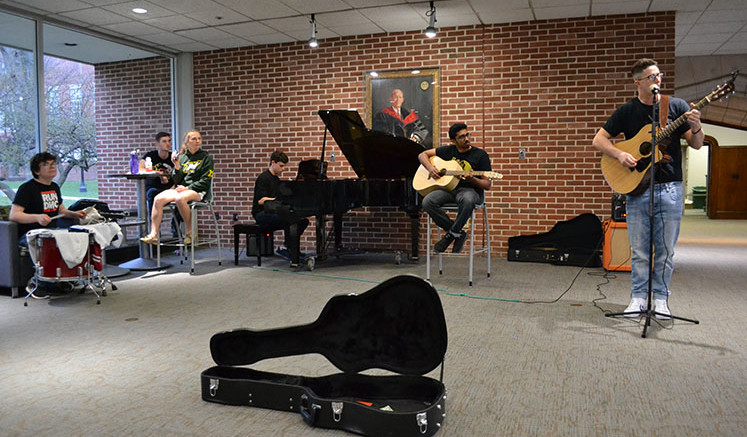 This semester, McDaniel’s improv comedy troupe, Dangersauce, debuted their first ever musical show. With an in-house band made up of Jehan Silva and Ben Kahn on guitar, Jake Fine on the drums, and Lucas Craig on the piano, Dangersauce played a series of musically themed improvisation games.

The show started out with a slam poem from Rachel Gunnerson. Audience members wrote down a few random words such as “headphones,” “carousel,” and “wine,” which she used to create a compelling introduction to Dangersauce. Then, a few group singing performances expanded on topics provided by audience members, such as paragliding, video games, and ice cream.

The troupe also included a few well-known games, such as “Mixed Tape,” where Rachel Gunnerson and Maryanna Lynch sold a mixtape to the audience, previewing several tracks sung by Mable Buchanan with beatbox accompaniment from Steve Alford.

Not looking to exclude the less musically talented members, the band switched places with members that did not know how to play an instrument in the game “Dueling Violins.” Ellie Davis, Matt Ulrick, Kiree Moore, and Steve Alford tried their hands at creating music, which, in the game, controlled the actions of their fellow Sauce members. Camden Ostrander, Ben Kahn, Jake Fine, and Maryanna Lynch were controlled by the music these members created as they acted out a scene inspired by the many staircases here on the Hill.

Finally, the night ended with an all-inclusive game where members took turns singing about saddening celebrity deaths. Overall, the night proved the quick wit and improv expertise of each member, as the audience was left roaring with laughter and calling for an encore.

Dangersauce’s next performance, their annual Hot Sauce Show, will play on Friday, April 20 at 7:30 pm in Ensor Lounge.