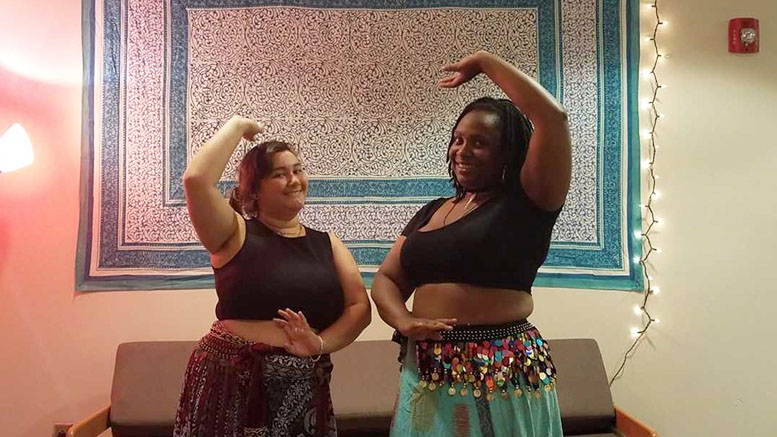 Sijui Kama Bartrum took up dancing at a young age – but as she got older, others told her it was time to give up her hobby. Instead, she found a new form of her favorite artistic expression.

Bartrum, a senior, is the president of McDaniel’s Belly Dancing Club. The club is a small but close-knit community of people who enjoy dancing. So far this year, the club has had two performances on campus.

Bartrum has been involved in dancing from a young age, and she readily discussed how belly dancing has helped her express herself.

“I started taking ballet, tap and jazz when I was 2 to 16,” Bartrum said. “As I got older, people told me I could not continue to do what I wanted because I had gained weight. I took what they told me and started taking belly dancing when I was 17.”

“When I visited McDaniel, they already had a belly dancing club established. This was one of the main reasons I chose to come here.”

She said she is excited to be in her position as president and hopes to inspire others through her moves.

“I was very happy with the club when I was a freshman and learned all that I could so that I could one day teach the class myself,” Bartrum said.

Sophomore Aiyana Jones is the vice president of the club. Like Bartrum, the Belly Dancing Club has helped her assimilate to McDaniel and college life.

“I was super nervous about joining college,” Jones said. “I had some confidence issues and I was worried about meeting new people because it’s hard to make new friends. The reason I started taking belly dancing was when one of my friends online suggested it to me,” she continued. “They told me it had helped them to get their confidence up, and now I’m the vice president. I like it because it helped me to have self-confidence.”

Imani Jackson, a freshman, was excited to start dancing as well when she arrived on campus.

“I heard about the club from my friends and I saw how much they enjoyed it,” Jackson said. “I enjoy the camaraderie, openness and the closeness of the club.”