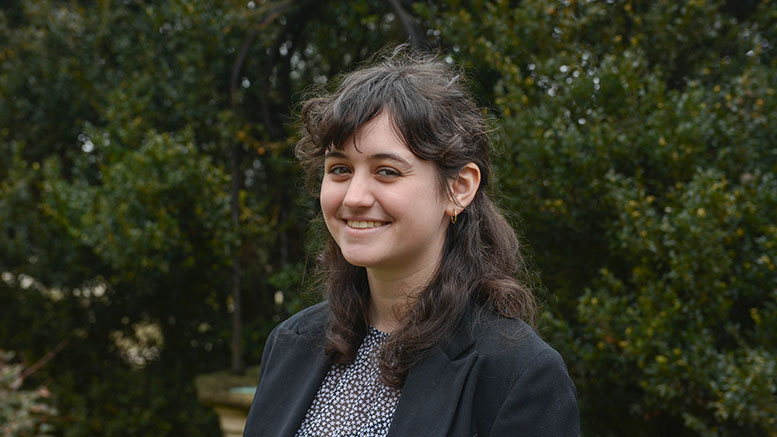 Tusannah Krauss, better known as Hannah, is currently wrapping up the last few weeks of her undergraduate years at McDaniel. She will be graduating with both an English degree after presenting her senior capstone “‘With a Voice Not Like Her Own’: Narrative Silence and Absence in Wilkie Collins’ The Moonstone” and a German minor, and has completed both the Honors Program and Global Fellows Program.

She is currently applying to graduate programs with the intent of getting a Master’s of Library and Information Science degree, and hopes to be an academic librarian.

While on campus, she has worked as a tutor for both the Writing Center and German department, was a peer mentor for two years, and worked in Hoover Library as an intern and in the archives.

During her senior year of high school, she attended Carroll Community College, where she was involved in their student newspaper, The Quill, but she didn’t become part of the Free Press until her sophomore year. “Once I started working for the Writing Center in my sophomore year, Professor Ambrose, who knew that I had previously been managing editor for The Quill, asked me why I hadn’t joined the Free Press here at McDaniel. Jimmy Calderon was also there and I’m still not quite sure how it happened, but I suddenly found myself sitting in an editor’s meeting as the Commentary Editor.” She is now the News editor, and says that she has loved managing her section and enjoyed working with the writers and other editors.

She was involved in several other student organizations besides Free Press, including Phi Beta Kappa, Phi Sigma Iota, Alpha Lambda Delta, and the Spelling Bee team. She has been involved in German Club for four years including as this year’s President, is currently the President of Sigma Tau Delta, and stage parent and former academic committee head in Alpha Psi Omega.

Hannah enjoyed her time on the Hill, saying “I absolutely loved my time at McDaniel. I was able to have a lot of experiences that I never thought I would, like being involved in the theater, and have loved the sense of community overall.” In her four years, there were two specific experiences that stood out as special, which were the theater’s production of ‘Snow White and the Seven Dwarfs’ and her time working for the Westminster Detective Library with Dr. Bendel-Simso over two summers.

A challenge that she faced was her commute freshman year, which caused her to feel a disconnect between herself and the rest of campus, though once she was able to live in the German House for a while, the distance did not bother her as much, even when she returned to commuting for a later semester.

The mentors in Hannah’s college journey were very important to her, and she states that “I’ve had a lot of mentor figures here while at McDaniel, so it is really hard to pick one.” She cites her peer mentor Mariah Ligas and first year advisor Dr. Esa of the German department as enormous help from her freshman year, and a big influence on her decision to pursue German.

Hannah also recalled meeting Dr. Bendel-Sismo at an Admitted Students’ Day, and how she became a mentor who she “really looked up to during [her] years here.” Andrea Briggs was also an influence upon Hannah, and helped her to discover her interest in library science. Additionally, she cites Professor Ambrose as another mentor figure. “Working at the Writing Center has been one of my favorite experiences here at McDaniel, sometimes barely feeling like a job for me, and I’m so glad that Josh gave me the opportunity to work there.”

Hannah offers this advice to those students who are not graduating yet: “Don’t be a hermit; go out and try things that push you out of your comfort zone. You have the opportunity to learn so many things at college that you won’t once you graduate. Take a class for fun, whether it’s pottery or history or a new language. Make the most of your time here.”

As a final word, she adds: “There are seven hidden dragons on campus. For real. Find them.”