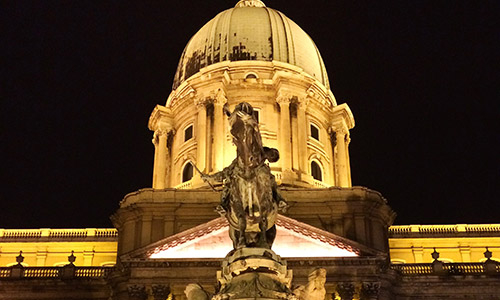 McDaniel College Budapest is in its third week of the new semester, and recent changes regarding the satellite campus in Hungary are underway.

One of these is the welcoming of more American students, from schools other than McDaniel, to the Budapest campus.

“[McDaniel Budapest] is sort of a hidden gem that we have,” said Director of International and Off-Campus Programs, Elizabeth Davis. “And we thought it would be a good opportunity for other schools.”

While McDaniel Budapest has hosted students from other American schools here and there in the past, such as Baltimore’s Notre Dame of Maryland University and the University of Washington, this year is different.

The College has a new, more organized approach for getting American students to Budapest.

This comes as a partnership between McDaniel and the University of Central Florida, a state school in Orlando with more than 50,000 students. Though no students from the university have taken advantage of the new partnership so far – this is its first year – it will ease the credit-transferring process between McDaniel Budapest and Central Florida.

“It’s a way to bring more people in and to share what we have,” said Davis.

Even without the Floridian students, the Central European campus is in fact seeing higher-than-usual numbers of Americans.

“This is certainly our highest level of [other American] students,” said Executive Director of the Center for Experience & Opportunity, Josh Ambrose.

Junior Justin Arter, who is currently studying in Budapest, lives with several students from Gettysburg College and said he has made friends with a number of other Americans there.

“We’ve all gotten along well,” Arter said in an email. “We get to experience the culture, and when we find things that we needed – like where to find an adapter, or buy school supplies – we all let each other know.”

This semester is also the second semester that the new “Crossroads of Europe, Crossroads of the World” curriculum has been taught in full. With the name “Crossroads” referring to Hungary’s diverse history and its central location in Europe, Davis said the curriculum aims to give students a European-focused education.

“[The school] wanted to offer something unique about Hungary,” she said. “[Crossroads] is taking on and capitalizing on our location and our unique position there in Hungary – building on that and helping students learn a little more deeper about that part of the world.”

Davis, who with Ambrose speaks regularly to the director of the Budapest campus, said that the curriculum so far has been a success. “The students are really enjoying it,” she said. “I think the faculty who are teaching really enjoy it.”

The school has also developed a program for students in the Honors Program to study in Budapest, primarily targeting freshmen and sophomores. Now these students can study in Hungary during the spring and take their Great Works course, a requirement for the Honors Program.

“We really want to see more first- and second-year students going abroad because, honestly, you actually have more flexibility in the McDaniel Plan early on in that regard,” said Ambrose.

Both Davis and Ambrose said they hope that with these new programs in place, they will see more students travel to Budapest and gain experience studying abroad.

“It’s so cool that our students, and other people’s students, can go and experience such an international campus,” said Ambrose.

For questions about McDaniel Budapest, contact Elizabeth Davis at edavis@mcdaniel.edu.

McDaniel welcomes students back for the fall 2020 semester with restrictions