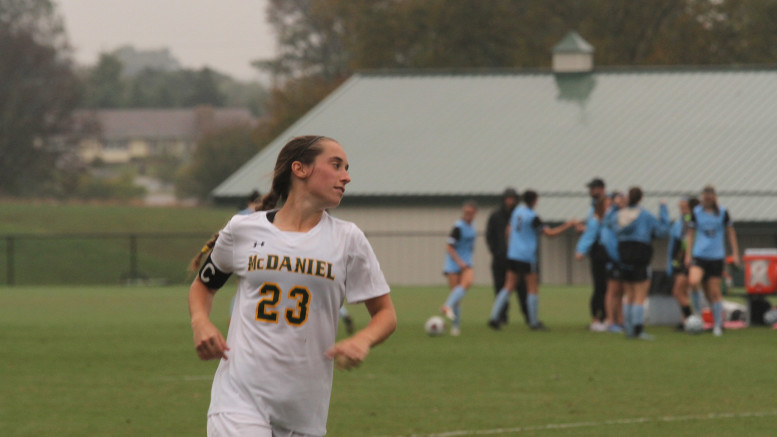 Katie Kirschenmann is known to be one of the most achieving soccer players in McDaniel College history. Finding success on the pitch as a player, Kirschenmann looks to make the transition to finding success in coaching after being named assistant coach earlier this season.

During her time as a player, she accomplished many feats. She led the team in goals scored her junior and senior campaigns totaling to be 19. Kirschenmann would go on to lead the Green Terror to three NCAA tournament appearances culminating with competing in an Eastern College Athletic Conference final. Finding success on the pitch, Kirschenmann would be recognized throughout the area achieving all-conference honors her junior and senior year, and all-regional honors her senior year.

When Kirschenmann is not coaching, she continues pursuing success as a student and professional. Kirschenmann currently works as an insurance agent at Frye Insurance Associates Inc. and is a graduate student at McDaniel pursuing a master’s degree in kinesiology.

Even though her playing days are over and a workload as a student and professional is put on her shoulders, Kirschenmann continues to participate in the sport she loves.

Despite being new to the coaching staff, transitioning from player to coach was not difficult. As a senior, Kirschenmann was granted many leadership opportunities, serving as captain and a student-intern for the coaching staff during her final undergrad semester in the spring of 2018.

As the assistant coach, Kirschenmann’s duties include setting up drills for practice, recording statistics during the game, recruiting student-athletes, and being a mentor to the team.

The team has welcomed their former captain back as part of the coaching staff.

“I actually think that [having Kirschenmann] helps,” senior defender Jo Rice said. “We already have a bond with her.”

Rice explained that through this bond Kirschenmann personally cares about her and her teammates and is not afraid to address any issues that arise.

With Kirschenmann already taking leadership roles as a captain and intern coach with the team last season, Head Coach Sandy Lagana welcomed back a team member already familiar with the women’s soccer program.

Lagana also said that the transition from player to coach was not difficult for Kirschenmann. Lagana let Kirschenmann’s resume speak volumes, highlighting the exemplification of many leadership qualities while she was as a player.

Despite Kirschenmann not really seeing the field during her first two seasons, Lagana noted how she was able to remain diligent and maintain a will to improve. The final result was her becoming the team’s leading scorer her last two seasons.

“Patience and work ethic is extremely important in college athletics,” Kirschenmann said. “It is important to understand that it is always ‘the team before me.’”

Kirschenmann remains focused on continuing coaching in the future, aspiring to take on her own head coach role for a college women’s soccer team at the Division III level.

“After I complete my graduate degree at McDaniel, I would like to stay on the staff as an assistant coach under Coach Lagana,” Kirschenmann said.