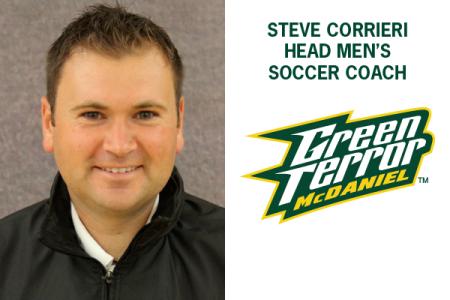 In a press release on the McDaniel College Athletics website, Moyer said  Corrieri “has been a part of programs that have had a great deal of success and we are confident that he can do the same thing with our team.”

Corrieri has spent the last six seasons as an assistant coach with the Spartans at York College, where the team has been ranked among the top teams in Division III.

According to the McDaniel College Athletics website, Corrieri said, “I’m very excited to take over the program…I’m looking forward to working with out guys here and can’t wait to get started.”

From 2002-06 Corrieri served as the head boy’s soccer coach at Sesquehannock High School in Glen Rock, Pa. The team did well under his coaching, winning four consecutive division titles and two York County championships. The team also went to the 2006 PIAA State quarterfinals.

Corrieri was a member of Carlisle United FC of the English Professional Soccer League from 1994-96. After his time as a professional player. he played in semi-professional leagues in England, Scotland, and Wales.

Corrieri has a United State Soccer Federation B License.

He graduated in 2000 with a bachelor of arts in Marketing Management in the Sports Industry from Wolverhampton University in Birmingham, UK.

Under the Lights: McDaniel Hosts Catholic in First Night Game

The Importance of Intramural Sports