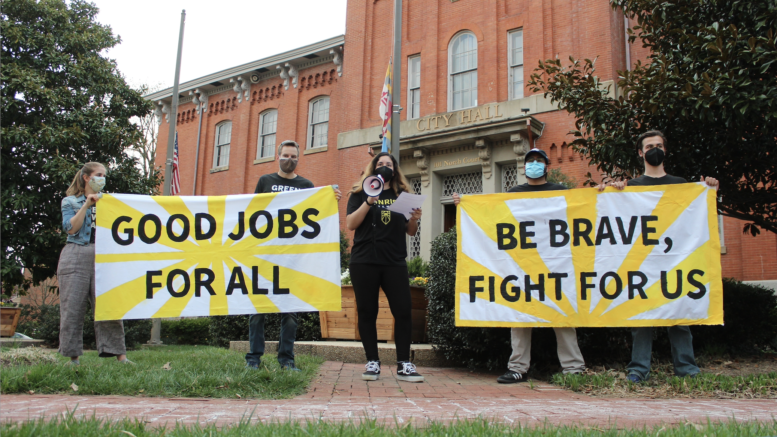 After a busy legislative session unlike any one we’ve ever seen, defined by key moments in video calls, resonation between attendees in private online chats, and hearings from our living rooms, legislators and activists now reflect on their victories and losses in the session in the debrief weeks to follow.

Sunrise Movement McDaniel supported a collection of bills through the 2021 Maryland Legislative session, which came to an end at Sine Die, on Monday, April 12. Sunrise McDaniel members residing in Maryland contacted their legislators by email and phone, signed petitions and sign-on letters, and spoke at rallies and events throughout the session along with many other Maryland Sunrisers.

This review of the legislative session will focus on portions of the bill package they endorsed, sorted into sections used by the Sunrise Maryland coalition in their communications.

The work of Sunrisers across the state secured the Public Service Commission Climate and Labor Test and Community Choice Energy in Montgomery County. However, early on in the session, the legislature denied the Maryland Constitutional Amendment for Human Rights, a headliner bill for the Sunrise Movement that would have created forward-looking language in the Maryland Constitution that enshrines all Marylanders have a fundamental right to a healthy environment.

Another popular piece of legislation that Sunrisers battled on till the very last day of the session, the proposed Climate Solutions Now Act (CSNA), failed as a package. Notably, the act would have increased Maryland’s greenhouse gas emission reduction goals to 60% by 2030 and net-zero by 2045, in line with recommendations by the Institute for Energy and Environmental Research. After moving out of the Senate with that goal intact, the House Environment and Transportation Committee, under Kumar Brave, lowered emission goals to a 50% reduction in greenhouse gas emissions by 2030 in the bill.

Other aspects of CSNA were passed as part of separate bills, like the initiative to plant 5 million trees by 2030 was included in “Natural Resources – Forest Mitigation Banks.” 500,000 trees will be set aside for historically underserved and redlined communitie and grant funding will be provided to the Chesapeake Bay Foundation, amongst other community groups, to support these goals.

The legislature also passed an Environmental Justice Commission, originally part of the CSNA, to assess environmental injustices in Maryland. Unlike its original form in CSNA, the commission will not have any power of its own and will only advise the Maryland Department of the Environment, nor will it have youth representation.

“A just transition will require deep, direct, and immediate redress of environmental harms committed against frontline communities,” said Stephen Leas, an organizer for Sunrise Baltimore and the Sunrise Maryland coalition that facilitated the legislative package endorsement.

“This is a very small step in that direction that does not meet the scale of the climate crisis and ongoing injustices.” said Leas, on the pieced parts of CSNA that were passed.

Good Jobs for All

Parts of the Essential Workers Protection Act, if passed in its original form, would have guaranteed protections for workers deemed essential during the COVID-19 crisis. The version of the bill passed will implement an Emergency Temporary Standard to ensure basic hygiene precautions are taken to protect workers. However, the bill will not guarantee paid sick leave, bereavement leave, or hazard pay.

The Food and Farmworker Protection Package failed in session, but would have guaranteed an expansion of paid sick leave to farmworkers and seasonal workers.

Maryland Sunrisers endorsed a package of bills from American Civil Liberties Union. The Maryland Legislature passed Anton’s Law, allowing the public to request disciplinary records; Use of Force Standard, requiring that force be necessary and proportional and creating new penalties for excessive use of force; and returned the control Baltimore City Police Department to local control from the state. Maryland repealed the Law Enforcement Bill of Rights in a watered-down version of what it once was, not implementing empowered community oversight in its passed version.

The Transit Safety and Investment Act was passed and will fund basic safety and accessibility upgrades for public transportation, enhancing the reliability of transit services through maintenance and safety assessments, prioritizing issues that arise, and accurate analysis, uninhibited by funding constraints. The legislature also passed the Zero Emission Bus Transition Act to transition state diesel vehicles to zero-emission buses over time.

The legislature passed the Organics Recycling – Composting, requiring large producers of organic waste to compost if there is a facility within a certain distance that can compost those materials. Additionally passed was the initiative to disqualify trash incineration and its products as recycled material and the Removal of Black Liquor, a byproduct of paper production that is burnt to create energy, from the Renewable Portfolio Standard.

Leaving the session, Sunrise policy organizers are looking forward to pressuring the federal Senate on the Green New Deal, reintroduced into the Senate on Apr. 20, 2021, along with the introduction of the Civilian Climate Corps.

Students attending McDaniel College who are interested in uplifting future legislation or candidates, educating about the Green New Deal, and representing community interests can come to meetings on Microsoft Teams weekly on Thursdays at 7 p.m. The link is available on their Instagram @SunriseMcDaniel or can be provided by emailing sunrisemcdaniel@gmail.com. To add your name to the fight for a Green New Deal in Maryland you can sign on individually at bit.ly/3tLbvhV.

Stephen Leas, Sunrise Movement organizer, contributed to the reporting of this article.

Why you should care about strategic planning