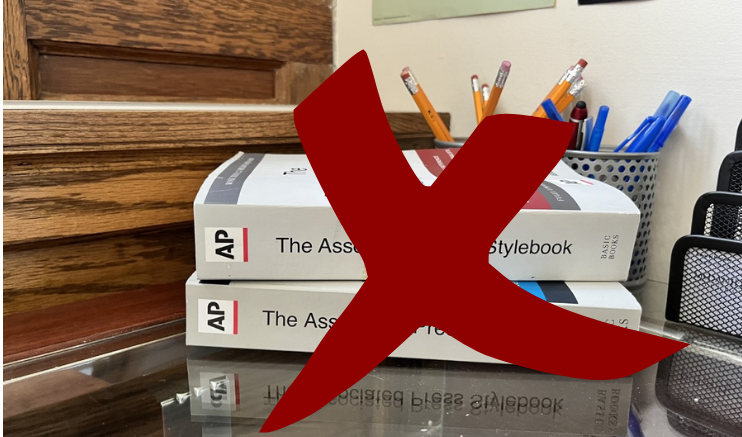 As your fabulous (and sexy) editor-in-chief over the past two years, I have had my fair share of exposure to Associated Press style, more commonly known as AP Style. Workshops. Style Guidebooks. Online Cheat Sheets. Made countless “*insert grammatical concept* in AP style” Google searches. You name it, I’ve poured myself into every mind numbing guideline and stylistic practice the Associated Press has to offer.

The guiding principles behind AP style are consistency, clarity, accuracy, and unimaginable arrogance. However, every attempt at these guidelines misses the mark, except that last one. In an attempt to be rid of this gatekeeper’s wet dream forever, I am requesting that the next editor-in-chief do away with AP style guidelines for the Free Press now and forever.

To give you a sense of how absurd this shit is, let me give a few examples.

Take states: When a state name appears next to a body of text, spell it out.

Actually, you should abbreviate it when the name of a city and a state are used together.

Or when it is used as part of a short-term political affiliation.

Plus, if you’re talking about a list of approx. 30 random ass cities, you don’t need to include the state name at all.You can’t make this stuff up.

God forbid you begin a sentence with a number, except (of course) for sentences that begin with a year.

Numbers below ten should always be spelled out, except for when referring to money. As journalists, I get that we want to sound fancier than we actually are, but I just can’t comprehend the consistency in that.

One of the largest contested issues of AP style is its absolute refusal to acknowledge the existence of the oxford comma. However, there is one exception: commas should not be utilized before a conjunction in a simple series, but should be used before the terminal conjunction in a complex series, if part of that series also contains a conjunction. HUH? Just let me have my extra comma! You’re unintentionally changing the meaning of my sentence!

Another problem with AP style is that it changes as quickly as the list of administrators employed here, making it nearly impossible for anyone to keep up with it. Up until 2010, it was proper to spell out “Web site” instead of “website”. The change was announced on AP Stylebook’s twitter account, @APStylebook, and was enforced immediately via the online version of the style book. I guess if you were a budding journalist who didn’t feel the need to constantly refresh their twitter account, wielding you unaware and helpless against the style change, you would’ve instantly been making an unintentional faux pas in the journalism realm.

The AP Stylebook is currently on its 56th Edition, never fully achieving the honor of perfection. Let’s hope the Free Press celebrates its 1st year (yeah, I did that) loosening itself from the grip of AP Style’s esoteric ways soon.