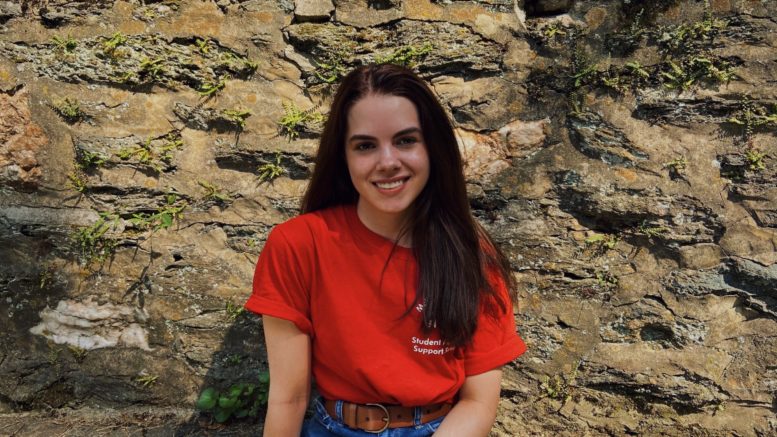 While a student at McDaniel I’ve worked in the financial aid office and the library for most of my time here. I’ve also been a mentor and mentor coach with the office of Student Accessibility Support Services.

What organizations were you a part of at McDaniel? What positions did you hold?

Have you enjoyed your time at McDaniel? If so, what did you enjoy the most?

I’ve enjoyed being able to wake up in the morning and be genuinely excited about my classes. I’ve been able to take so many interesting and fun classes that have shaped my interests and who I want to be when I enter adult world. The small class sizes have made it easier for me to feel comfortable speaking up and engage with the material being taught and in turn I’ve build great relationships with several of my professors. I’ve always told myself that academics are my priority and that being successful academically is what we’re all ultimately here to do. While I’ve enjoyed the social aspects of college life what has made a significant impact on me has been the classes, faculty, and everything I’ve been fortunate enough to learn.

Who do you think was/is your best mentor?

My first and greatest mentor that I’ve had at McDaniel has been Melanie Conley in the SASS office. From day one (after her and my mom realized they’d known each other through teaching before I was born – which was kind of freaky) she’s shown me a level of kindness and support that I’d been looking for coming from a toxic high school environment. I think that for a lot of students who have been involved with SASS that the faculty there have been what’s made a huge difference in our academic success over the years. I know that if I have a question or even just need to speak with someone that I can reach out for that extra assistance. I’m aware that there are a number of students on campus who look down on/discriminate against students registered with the SASS office. I’ve personally dealt with and seen other’s face abelism and bullying through working with the Step Ahead program (which is a yearly program that takes place prior to freshman orientation to help incoming students become acclimated to college both academically and socially) and this is one of the things that motivated me to pursue social work as a major. Now, having had the experience of being a mentor for others I feel as though I would make freshman Jordan proud.

Describe your favorite memory at McDaniel.

An organization that has made up a large portion of my time at college has been Phi Mu. Having been so involved with my sorority has given me a plethora of leadership opportunities, but I’ve come to realize that it’s been the small moments that I’ll look back on and cherish the most. Studying outside with my Phi Mu sisters, going on late might Wawa runs, movie nights on the Phi Mu floor, having impromptu photo shoots, and even just having a deep conversation when I’ve needed a friend has all meant the world to me. I don’t have a specific memory, I have several. I owe so many of those little moments that made me to Phi Mu and everyone in it.

What are some of the challenges you encountered and how did you overcome them?

During my first years at McDaniel I felt the need to do everything even if it meant I was spreading myself too thin. I wanted to prove to people that I could be dedicated and committed to my academics, campus organizations, working, and having some semblance of a social life. This ended up causing me a lot of stress and as a result my grades and relationships began to worsen. College can be overwhelming and when I was at this overwhelming point I began to focus on my mental well-being which was something I had been neglecting for a while. I began working more with the SASS office to improve my grades and I opened up about my struggles to friends which was hard to do as a relatively guarded person. It was challenging for me to admit that I needed to take a step back and that I couldn’t do everything by myself, but it ended up working out for the best.

I will be getting my Master’s in Social Work at the University of Maryland school of Social Work in Baltimore as a full time Advanced Standing student, and will graduate in Spring 2022.

What would you tell yourself as a first-year student at McDaniel?

I would tell myself that college really is what you make of it. It’s normal to be confused and doubt yourself and your abilities coming into a new environment that may be significantly different from grade school, but you can’t let that stop you from trying new things and figuring out what you want to do with your life. I’d remind myself that I’ve survived 100% of my worst days so far (as cheesy as it sounds) and push myself to take chances and do what makes me happy even if someone else doesn’t understand it or agree.

Where do you see the world in 10 years?

Ideally, I hope its still turning and that things have improved somewhat. Whether that be in regard to the environment, human civilization, or both I truly hope that I can see a brighter future. I see us moving in a more inclusive direction that promotes progress, diversity, and advocacy instead of hate, divisiveness, and exclusion. I have a lot of issues with the United States that I know a good chunk of my college community shares, but I also know that my graduating class is full of people who want to help set those positive changes in motion. I hope that I can see myself and the friends I’ve made over the past four years being a force for change.

How do you reflect on your senior year during the time of the COVID-19 pandemic?

I came into my senior year prepared to focus on myself and my academics. The first six months of the pandemic were extremely hard on my mental and physical health and I had no idea if I’d be able to get through my last two semesters of undergrad without a few mental breakdowns from time to time. This year I’ve had to spend more time with myself than I had in my first three years of college, but this ended up allowing me to learn how to be kinder to myself. I have no regrets about sticking to Covid-19 guidelines even if there have been a decent amount of other seniors who haven’t seen the pandemic as a serious issue. I’m thankful for my major that has given me the opportunity in my last year to grow into a more mature, resilient, and empathetic person who’s ready to see what the future has in store.

I came to college unsure of who I was and what I wanted. I definitely had my fair share of days where I felt down about different parts of my life, but I wouldn’t change a thing because it all lead to me being where I am today. Thanks McDern for giving me a home and a family I don’t ever want to say goodbye to.