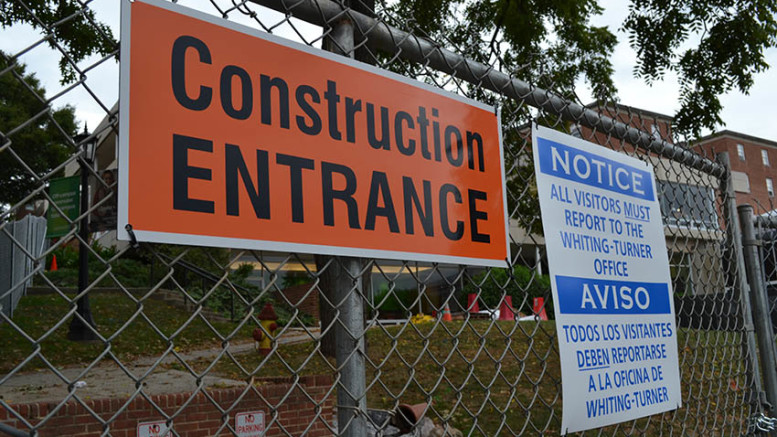 Renovations on the McDaniel Decker College Center have been brought to an immediate halt today as its workers began to speak in new and unknown languages.

The work to remodel the College Center began in fall of 2019, following a plan to completely remake it into a nexus of student activity. With 10 million dollars dedicated to its construction, the work continued unimpeded until just this morning.

According to eyewitness reports, as the construction crews began their morning work, a beam of blinding light fell upon them from the heavens, and when it cleared each worker spoke a different language so that none could understand another. The day’s work promptly fell to chaos as each worker began to panic, crying out with confusion and fear in words only they could comprehend.

“I just don’t understand,” President Casey said. “Why did this happen? It would have helped bring in more students, and given the existing students a place to spend their time instead of their dorms. This really doesn’t make sense.”

When the student population was asked about their feelings on the matter, responses were more mixed.

“I think I would have preferred 10 million dollars worth of AC in the dorms,” said a student who wore a balaclava and insisted we blur their face in the video despite being a text medium. “Or maybe put more than one outlet in the classrooms.”

“This is just!” proclaimed another student who identified himself as Michael, whose flesh seemed carved from porcelain and whose eyes burned with white flame. “This edifice was to be of such opulence and excess that Mammon himself would be driven to weep with envy! Such vainglory and arrogance is a sin among sins, and for this they were struck low by God above, denied even the comfort of the basest of vermin to find companionship in another of its ilk, to whom it can tell of its joys and sorrows! But who am I to know the justification of the Almighty? Certainty not one who has sat at Their rightmost hand since time immemorial, for I am an ordinary college freshman! How about that tuition, am I right fellow youths?”

Michael then attempted to dab before discorporating into a maelstrom of burning wings and eyes that both saw and were infinity before vanishing from sight, presumably to return to a common room that was hastily refurbished into a dorm, where such ordinary freshmen live.