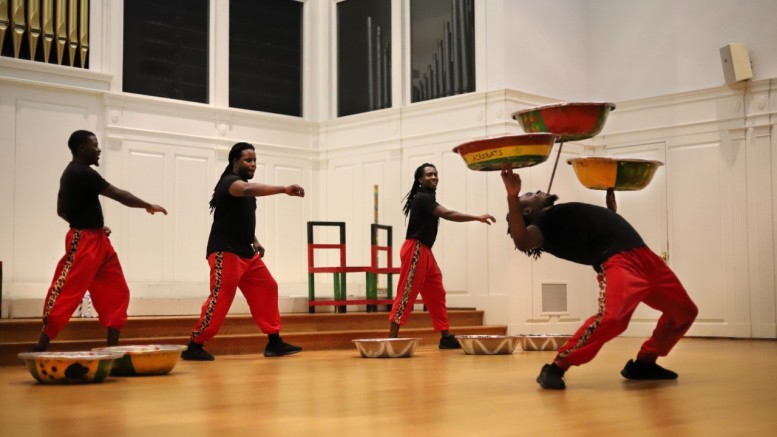 On Feb. 20, the Kenyan acrobatic show that was featured on “America’s Got Talent” lit up the stage of Baker Memorial Chapel, embodying the Bantu culture of East Africa to Lingala music.

Beginning at around 7 p.m., after a brief greeting speech from the Office of Diversity and Inclusion, the five acrobats dove right into it. They started with some back flips, cartwheels, and the classic “are you ready?” to make sure the audience was hyped for what was about to escalate.

Progressing from simple dancing and bundling tricks, these guys would then invite members of the audience to participate in the limbo.

The real stunts started when the chairs were brought out for handstands. Originally balancing on a single chair, they would then stack them one by one until the fourth one was positioned on an angle, further exemplifying their skills.

Following the chair stands was jump rope, but it was not done in the traditional manner. They would jump on their hands, do flips, and pushups. Once again audience members were included, however this time they were recruited as means of encouraging those who were nervous to come up on stage and go all out.

Throughout points in the show the group members would tease that it was already over by saying, “You guys enjoy the show?” or “Can we say bye now?”. This was just a means of making sure the hype didn’t die down in the slightest.

The group also masterfully balanced spinning bowls using wooden dowels on their hands, feet, and even their faces all at the same time.

Closing with the pyramid position with the audience for the last time, they said their final goodbye, allowing pictures to be taken with them just before leaving.

“I like the fact that they brought culture to campus we don’t get much of that,” said Corin Cole, an attendee.

It was a night of culture, music, and dancing. This event—part of several ways to honor Black History Month at McDaniel—was open to anyone; students, staff, alumni, and their families were all welcome.

A welcome from the Free Press