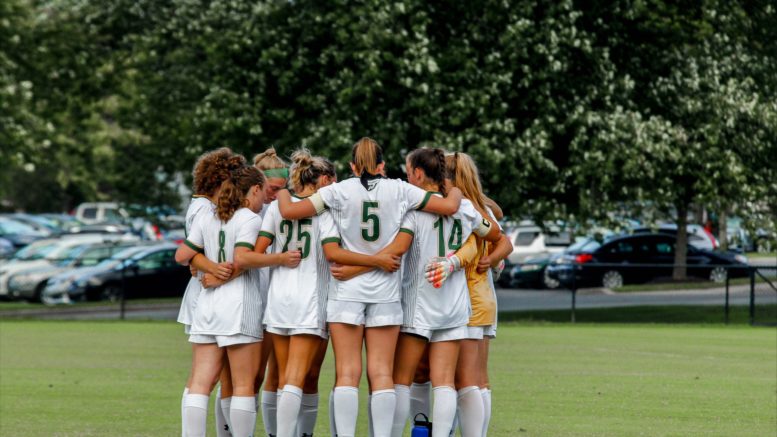 This season for the Green Terror has been one for the storybooks. They have worked super hard to get to where they are now, dedicating themselves every single time they take the field, and as a result, have had a few other victories.

McDaniel’s Women’s Soccer was on a roll ever since their first game, a 3-0 win against Catholic University.

But the team’s roll didn’t stop with just one win, they went on to bring home the victory in their next nine games, still without allowing the other team to score a goal. One win, in particular, was huge for the Green Terror.

On Sept. 15, The Green Terror beat the number 1 ranked team in the country, Messiah College by a score of 1-0. The lone goal of the game was scored in the 77th minute by senior forward and one of the team’s captains, Hannah Schepers.

“Scoring against Messiah was an extremely exciting moment,” Schepers said. “We had worked hard the entire game and it eventually paid off when [graduate student, midfielder] Maddie Schwartz played a perfect pass to me late in the second half.”

This moment is an unforgettable moment for the whole team.

According to Schepers, “everyone was super excited since we had just scored on the number one team in the nation.”

Schepers also mentioned there was a significant chunk of time left in the game, so the team had to stay focused on the task at hand.

With minutes remaining to play in the second half, down one to zero against Messiah, Hannah Schepers scored the game-tying goal. Which was another big part Schepers played.

“Remaining confident in myself and my teammates is very important and has defined who we are,” Schepers said. “We were down 1-0 to Swarthmore, but we did not let that hurt our confidence or change how we played.”

Since that win against Messiah, the Green Terror have climbed their way up into the United Soccer Coaches Poll top 10 for Division III schools.

Unfortunately for the Green Terror, it was against Swarthmore, that McDaniel’s streak of not allowing a goal ended. According to the McDaniel Athletics website’s game log for the Swarthmore game, the impressive streak lasted 1,235 minutes and 44 seconds dating back to the 2019 season.

It was sophomore midfielder Elaina Kluttz who scored the game-winner with less than five minutes remaining in the match. This goal also happened to be Kluttz’s first career college goal.

“Scoring my first college goal was extremely exciting for me, especially because it was a game-winner,” Kluttz said. “All the hugs and love I received from my teammates made it a moment I won’t ever forget.

Unfortunately their winning streak came to a frustrating end on October 13th versus a number two ranked team in the nation, Johns Hopkins. A 2-1 loss, but they fought hard through a sudden-death over time.

Since that loss, the Green Terrors won their next two games, and with only a couple of games left, they hope to keep up their momentum to fight for the Centennial Conference title, and the National title as well.

After all that McDaniel women’s soccer has done this season, it makes us wonder, what can’t this team do?