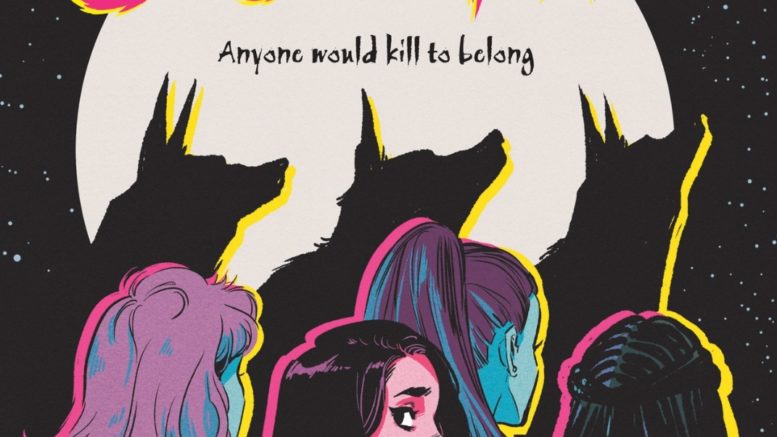 “You know, you gotta be careful around bitches. We roll in packs.”

Maybe you’ve heard this one before: the new girl gets invited to sit with the popular clique at lunch and soon finds herself admitted to their ranks. Sooner or later, though, she discovers that popularity isn’t all it’s cracked up to be. Maggie Tokuda-Hall takes on this beloved trope in her graphic novel Squad, illustrated by Lisa Sterle, and adds a twist.

Transfer student Becca soon finds out that the popular girls who invited her in are actually… werewolves?! When given the choice to join the pack, Becca does so without a second thought, but there is a catch. In exchange for their newfound power and strength, the pack has to feed. Once a month, during a full moon, the pack hunts down a human boy (“the worst ones”) and eats him to regain their strength and control their hunger. Soon enough, though, things get complicated and the pack faces discovery or going hungry. Becca then has to make a decision about what she wants from life and how far she’s willing to go to get it.

Squad was a perfect blend of Mean Girls and Jennifer’s Body. Some may argue that the plot is overused (Heathers is another good example that falls into a similar category) but that doesn’t stop it from being campy and fun. There is a major content warning for sexual assault and violence, since these are both pretty relevant topics to the plot. There’s also just some generally insensitive comments made about slut-shaming, disordered eating, homophobia, and Becca’s ethnic background, but for the most part, these are put in the mouths of clearly flawed characters and are not put in a positive light. I’m also aware that some killjoys don’t consider graphic novels as “books” but in my opinion, it’s just another style, one I very much enjoy myself.

As for the art style, I’m a big fan of the character design and color scheme. All of the characters are unique and easily identifiable, which is helpful in keeping the plot straight. The colors are really bright and eye-catching, dominated by pinks, blues, teals, and oranges, fitting perfectly with the fast pace of the story itself. The graphic novel itself isn’t too long (about 220 pages) which means that there isn’t quite as much resolution as I would like, especially regarding Becca’s relationship with her mom and her developing romantic relationship with another character, which happens almost entirely off-page. The characters are also incredibly morally grey, and because of that, not always entirely likeable, but they make it hard to look away. Squad accomplishes a lot in terms of taking on sexual assault and the expectations on women to be passive rather than aggressive. It also acts as an allegory for the hunger that women feel for space, a voice, and control over their lives. It may not be the most nuanced take, but I don’t think it has to be. It can still be a dramatic, enjoyable read about a popular clique of high school girls that are secretly werewolves and be left (mostly) at that.