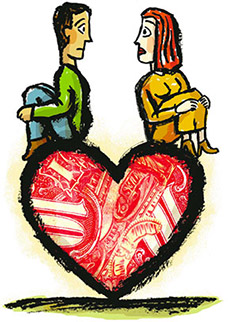 It is the start of Meg and Ryan’s first spring break trip together; they are headed for a romantic beach and an expensive hotel room that Ryan is planning on spending as much time in as possible. The couple is unpacking their belongings, getting ready to hit the beach when the sound of shattering glass breaks the silence. A vase shatters into a million tiny pieces, the roses are flung across the floor, and reddish water seeps into the carpet.

Ryan spins around to face a furious Meg aiming a box of chocolates at him. This is also Meg and Ryan’s first fight. Meg is pissed and throwing things across the room at Ryan and always seems to miss, thus destroying their hotel room and the romantic items Ryan had placed around the room (he had even colored everything including the rose water her favorite color, red).

So what are Meg and Ryan fighting about? Check out this Top 10 couple (or ex-couple) approved list of things most fought over:

1. Not spending enough time together is a big one as sophomore, Lauren Handel pipes up about her ex boyfriend “We would be at home but it was never just me and him.”

4. No sense of empathy

5. Will not admit when they are wrong

6. Not doing special things for each other

7. Acting inappropriately with other individuals

9. Misunderstandings are also annoying. Gabi Brandi says, “It can be the tiniest thing that sends both of them over the edge into the breakup threats zone.”

Sex on the Hill: Tech-ually Active