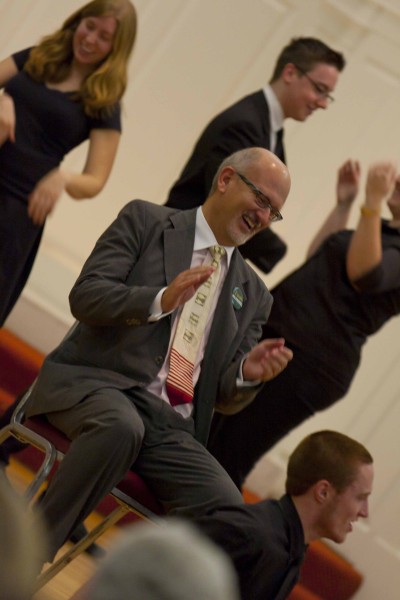 President Casey delivered his Inauguration speech on topics ranging from future plans for McDaniel, the importance of the liberal arts education, and wise words from famous leaders on April 16.

He discussed plans to build a café in the Hoover Library Commons and dedicate it to his parents. Construction of this will begin this summer, confirmed George Brenton. It is said Ethan Seidel and the President have been looking at plans for this addition since this past fall semester.

Casey also reminded many students, faculty, staff and parents that “McDaniel was the first co-ed liberal arts institution of the south after the Civil War” and that “WMC led the national liberal arts college movement throughout the country.”

He went on to say that we are a model for liberal art schools of the future, saying that “liberal arts continually change and that we must keep changing our own lives so we can change lives for a changing world,” including the adopted motto since his arrival.

He also included the “I am McDaniel” pin into his speech, commenting that they are in many new languages and that by spreading the McDaniel name more people will be able to adopt a liberal arts attitude and outlook on life.

He went on to highlight McDaniel’s particular strengths, such as that “the small college is irreplaceable.”

Casey continued that “there is a great need for such institutions” that build and cherish the relationships between students and faculty and staff so students feel confident to build relationships out in the world.

Dr.Casey wants McDaniel to generate a whole network of people, mentors, advisors, etc to help students so they have a full support system to make students’ dreams come true.

Dinner with the President